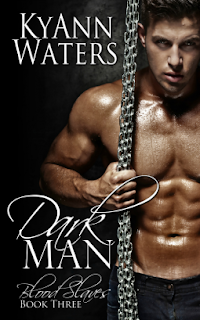 Nothing can endanger the vampires’ existence. Theron, known in the club as Tac, will destroy any who try. He is dominant and dangerous—in total control of his world. He lives only for sex and blood. He has never been emotionally involved with anyone. Now, a human has slipped into his life and under his skin, making him want more than meaningless sex with blood slaves. But Theron will never allow a mere mortal to bring him to his knees.

Vance's friend, Seth was murdered and he gets a lead that the last place Seth was seen alive was at The Catacombs which turns out to be a MM bondage fetish club. So Vance goes there to try and find the person who last saw Seth and who may have killed him or at least knows what might have happened to him.

Tac is the owner of The Catacombs and he's also a vampire. He lures Vance into the club and seduces him into using the club's facilities while having a sexual relationship with him. Vance has no idea in the beginning that Tac is a vampire or what lies beneath the club until later.

Tac is one of the original 7 vampires that were left alive after a disease wiped out all the other vampires centuries ago. His club is also a place where the vampires he's turned can find willing blood slaves since he has a strict no killing humans policy and can only take blood from willing blood slaves.

Tac let's Vance find out about the vampires beneath the club as well about what he really is. He was hoping that Vance would willingly become his blood slave but Vance has no plans on willingly becoming a slave to Tac even though Tac has made it clear that now that he knows about vampires, he'll never let him go back to his old life. He might not be a blood slave but he's not free to leave either. Tac tries to seduce Vance into his new role but he's just not having it even though he has real feelings for Tac and thinks Tac has feelings for him. Tac isn't used to having such strong feelings for a human but he knows that his feelings for Vance are different than what he feels for his other blood slaves.

These two were so hot together and when Tac would bring another person into their sexscapades, it just made it even more hotter. Tac and Vance ended up burning up the sheets so this book was a really fun read. I do love a sexy vampire who knows what he wants and goes after it with both barrels and this guy sure does that and more.

I was given a free advanced reader copy of this book via NetGalley in exchange for an honest review but all opinions are my own.