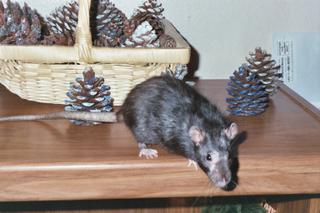 This is my Rat, romi..Isn't she sweet!
Posted by Mary Kirkland at 8:17 PM 0 comments

My brother called me this morning to tell me he and his girlfriend went to the movies the night before and how mad he was that people had brought their kids to this movie and all he did through the whole thing was give people dirty looks. It got me thinking, cause let me tell you, when I go to the movies and there happens to be squeeling kids in the theatre interrupting the movie I paid my $7.00 to see you better believe I say something. Unless of course I'm at a "G" rated movie and then I know kids will be there.

But people, there are people who bring little kids to loud, violent rated "R" films and then spend half the movie trying to calm down the terrified kid. Do they think this is a friggin playground? I would imagine that the very last person you want to piss off is someone watching a slasher movie and that, my stupid, breeding friends, is me! Take the kid outside - he obviously doesn't want to be here!

It did not take me long to get damn tired of those stickers that manufacturers put over CDs and DVDs.
Excuse me, but do you really think I have the time -- after pulling off the frickin' plastic wrap (which already clings more than a manic-depressive high school girlfriend) -- to fiddle with a thin little sticker that has supposedly been put on there "to assure freshness" or some stupid shit like that, but that really serves the express purpose of pissing me off so much that I wish whoever thought of this idea would get a vicious prolonged form of head cancer. That's right -- you heard me -- head cancer.

My neighborhood is getting bad and how can you tell it's bad, When you have to ask yourself this one question.... Why the hell do so many of my neighbors have Volvo-sized ill-tempered dogs that they just let run around?!

I guess I can hope the pepper spray will stop them as I'm out taking a leisurely stroll down the public sidewalk, but one of these mornings, I'm going to be walking and one of these dogs is going to bite me -- at the exact same moment the stupid owner (usually carrying the damn leash) is shouting "Oh, don't worry -- he won't bite!" For this alone, I've considered getting a gun, but instead, I think I'll just mix antifreeze with hamburger and carry little poisoned meatballs around. no don't get mad at me...get mad at the stupid friggin owners of thses viscious animals who let them run around loose.

People who get all dressed up in their sunday best to go to Walmart and bring their kids with their crusty noses, dirt rings around their necks, faded dirty clothes with jello spots the size of a damn boulder right on the front, and bare dirt crusted feet. I consider this a form of child abuse. These parents should be horsewhipped.

The English language has taken an incredible beating the last few years with the advent of "liketalk"... I don't know what else to call it. What I thought was a passing fad - the typical American teenager's faddish interjection of the word "like" into every single sentence

-- has become so rampant it is a disease. Even thirty year olds and business executives talk this way! "Like" is used not only as "um" is used, a chronic and useless interrupter - it actually takes the place of adjectives, nouns, imagination, intelligence, etc. etc. etc.For instance, you no longer have to say,"She was furious at me.."You just say,"She was like "aaaaaghh!"No need for such tedious sentences as "He said, I'll take care of it." Now it's "He was LIKE I'll take care of it"So you see there's no past tense any more, there's just the pea-brained characterization of any event, any shade of meaning, past, present or future, relevant or irrelevant, as "LIKE" Now when you combine that with the word "ALL" and the incomprehensibly ever-rising popularity of the word "shit",

you have something approaching the deterioration of our daily discourse to the most atrocious and stupid sounding toilet talk: here goes!: Instead of: "Maggie told me last week how much he enjoyed the Music artist Aerosmith" She said he could listen to it all day and not get tired of it..." We now can say, "Aerosmith?" "maggie was all like, 'That's the shit!" WHAT HAS HAPPENED?????

One of my pet peeves is a person who eats with mouth open, showing their partially masticated food to all.I know I have talked about this one before, if I can see your food while it's in your mouth, your doing something wrong.

Leaning over my shoulder or stepping within a couple feet of me to talk. This creeps me out. Again with the personal space. Step back, please. I'd really rather not know how recently you bathed.