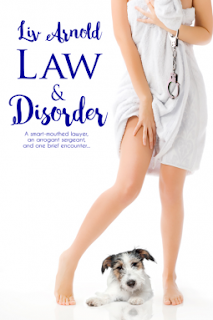 Lawyer Juliet Jackson has come head to head with Sergeant Jesse Burns on numerous occasions in court. He is provoking. Pigheaded. Punch-worthy. They don't get along. Not one little bit. The unfortunate fact he's also her next-door neighbor brings her loathing off the charts. But when Juliet's caught locked outside her home in nothing but a skimpy towel, she must swallow her pride and turn to Jesse for help. She doesn't expect the explosive chemistry between them and can't help but wonder if Jesse's as demanding in the bedroom as he is in the courtroom.

Juliet and Jesse have been at odds in the courtroom on more than one case. They don't like each other at all. He's a cop and she's a lawyer and the book opens to him on the witness stand while she cross examines him and she doesn't like anything he says.

At home after a shower and wrapped in a towel Juliet gets locked out of her house because of her dog. She falls down into a shrub when she tries to get through a window that won't budge. Her towel falls down and that's when Jesse shows up from work to go to his house next door, he gets a little surprise. They didn't get along but Jesse offers to help get her door open.

Once inside the sparks fly and they find themselves drawn to one another as one thing leads to another.

This was a really short story/novella of just 24 pages. I would have liked it more if there had a little more story to it but it was a fun little romp.

Disclosure: I received this book free from NetGalley but all opinions and thoughts are my own.