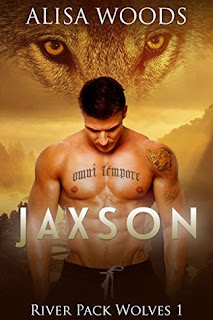 Three brothers. Three Secrets. One hope to save the shifters of Seattle. Former SEAL Jaxson River would give his life for his brothers and his pack, but if he doesn’t claim a mate soon, he’ll be forced to step down as their alpha. There’s only one problem: Jaxson’s dark secret would kill any mate he claimed. With someone kidnapping shifters off the street—and only Jaxson and his brothers, Jace and Jared, to stop them—now is not the time for his secret to come out.

Curvy Olivia Lilyfield is a half-witch orphan with a dark secret of her own. She wants to atone for it by doing good in the world, so when she finds a wolf being tortured in an alley, she doesn’t hesitate to help… even though wolves and witches mix like matches and TNT.

Olivia’s dangerous magic means she can’t let anyone get too close—but Jaxson can’t keep his hands off her, and his kisses are more than she can resist. As they race to save the disappearing shifters of Seattle, the true danger lies in loving each other. They’re playing with magical fire… and their secrets could end up destroying them both.

Jaxson is a complete novel with HEA, the first in the River Pack Wolves trilogy.

Contains scorching hot shifters, alpha military heroes, and sexy witches. Only readers over 18 should dive into the deliciously hot world of the River brothers.

Liv doesn't love her job as a reporter for a sleazy celebrity stalking paper but it's paying the bills for the most part and with her so far behind on the bills after a set of bad occurrences happened including getting hacked, she can't afford to drop this job. But that's exactly what she does and on her way home she spots a couple of guys torturing an animal and before she can think about what she's doing, she saving the animal from more abuse.

Except the wolf wasn't just a wolf, it was a shifter. Once the bad men ran off the animal shifted and thanked her for trying to save him.

Jaxson had sent Liv off after she tried to save him. He hasn't had much luck getting her out of his mind since then but since he was the alpha of the River Pack, he had a lot on his plate to keep himself busy.

Jaxson needs an an office assistant and Liv needs a job so they come to an agreement and since they both seem to have the hots for one another it works out well for both of them.

Shifters are going missing and Jaxson and his wolves are trying to figure out who is behind it. So when another shifter goes missing he and the other wolves go out to find her and that's when a lot of things start happening fast. This story is filled with secrets, twists and so many hot male wolf shifters that seem to be keeping secrets of their own. The three brother's all seem to have some deep dark secret of their own and I'm looking forward to finding out what they are.