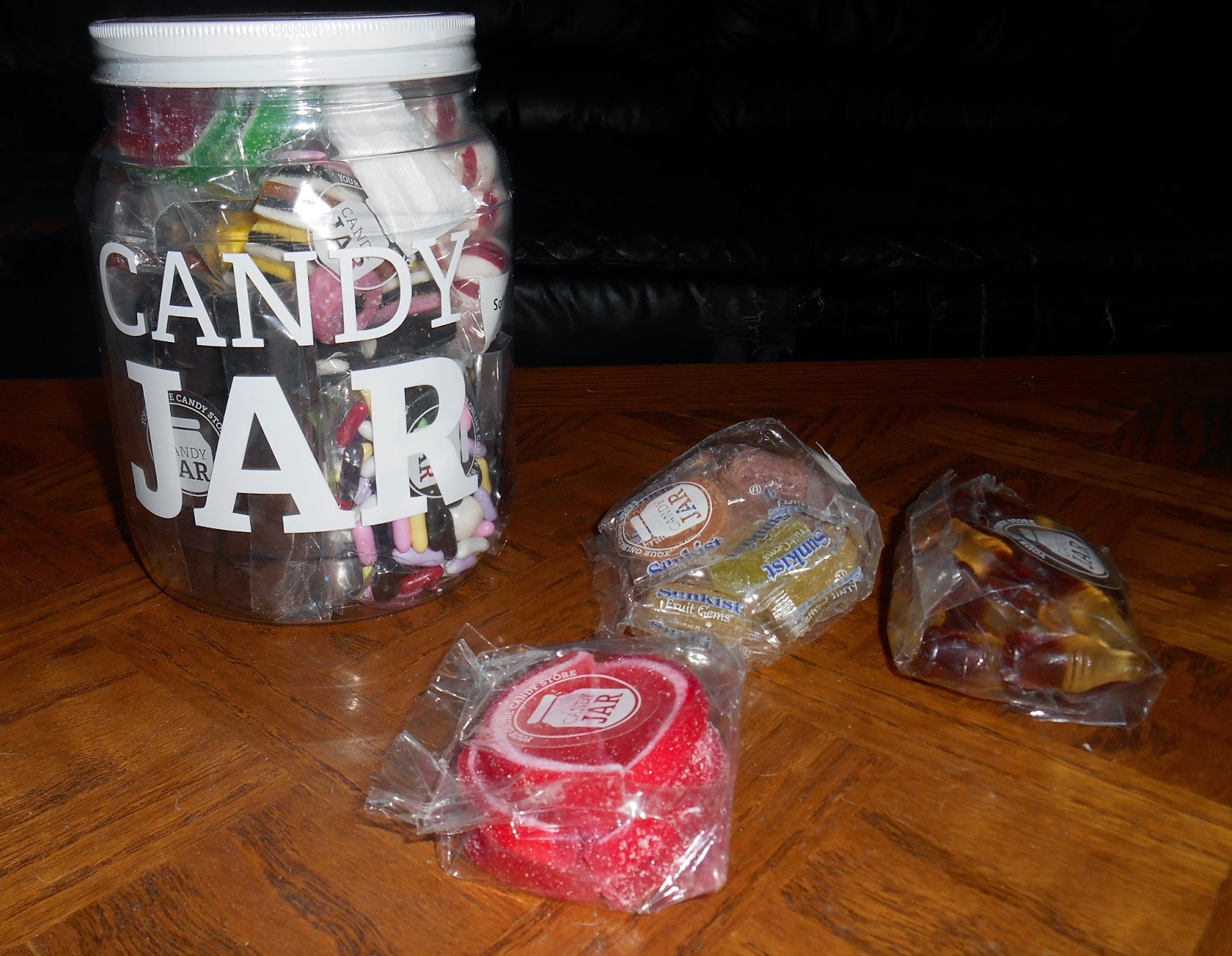 I first saw Candy Jar on fb and decided to click on the ad to see what it was all about. After reading that the site lets you pick the candy that you want and you can get scoops *about a handful* of a lot of different candy, I knew I was going to order a Candy Jar. You can order three different sizes with a different number of scoops for each jar. I decided on the 16 scoops. There are 8, 16 and 32 scoops that you can choose from. The 16 scoops that I decided on is $29.99. When my Candy Jar arrived most of the candy was already in the jar but not all of it fit because some candies are larger than others. Each scoop of candy is packaged and you can choose how to display it or which ones to put into your jar. 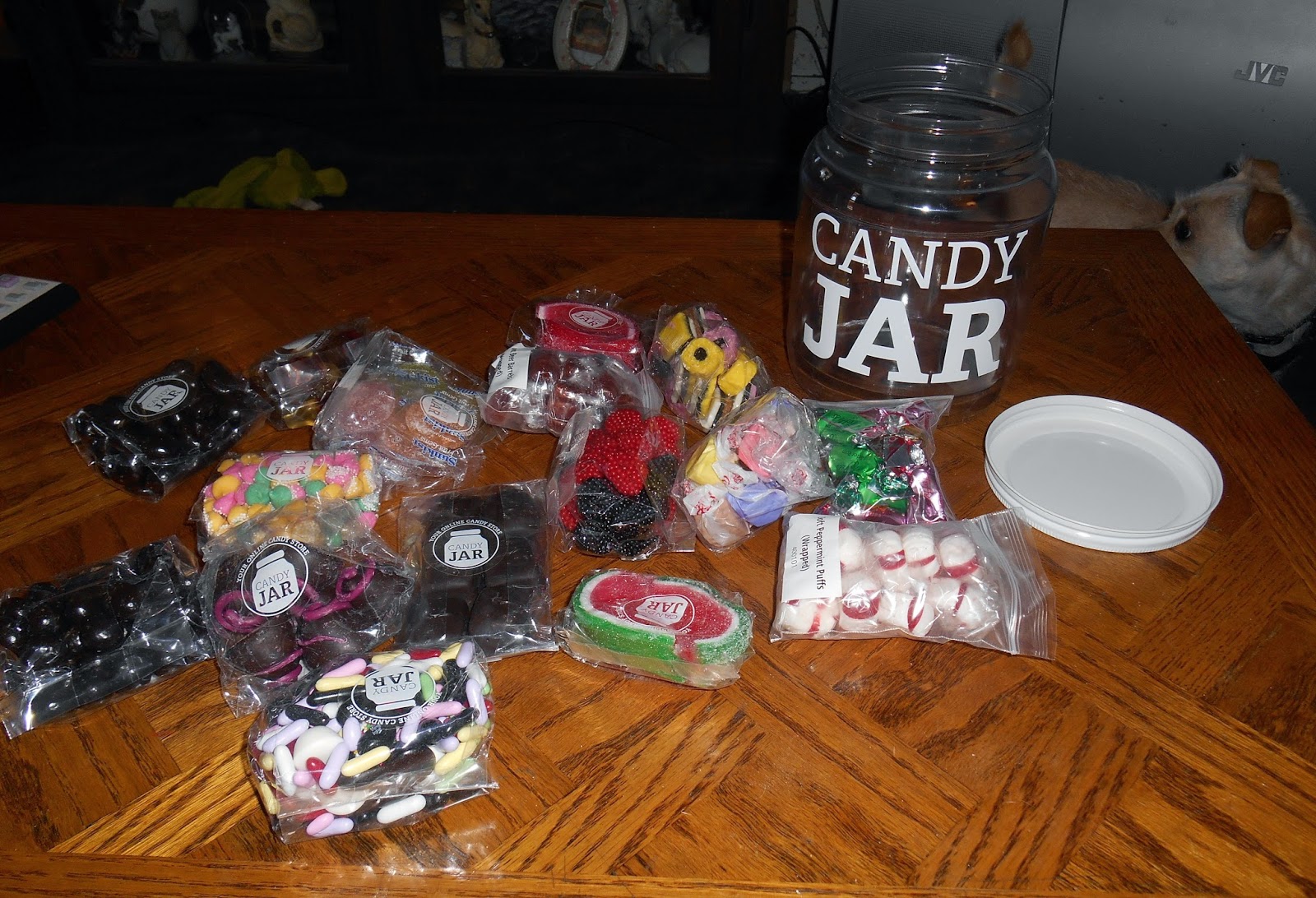 I decided on trying 16 different types of candy and opened all the packages that had the wrapped candy and put that in the jar first. Of course I sampled some of the candy as I added it to the jar, you know just to make sure it was fresh and tasted good. My husband was sampling the goods as well and all I heard from him was, "MMMmm good, this is good, yeah I like this one too." LOL 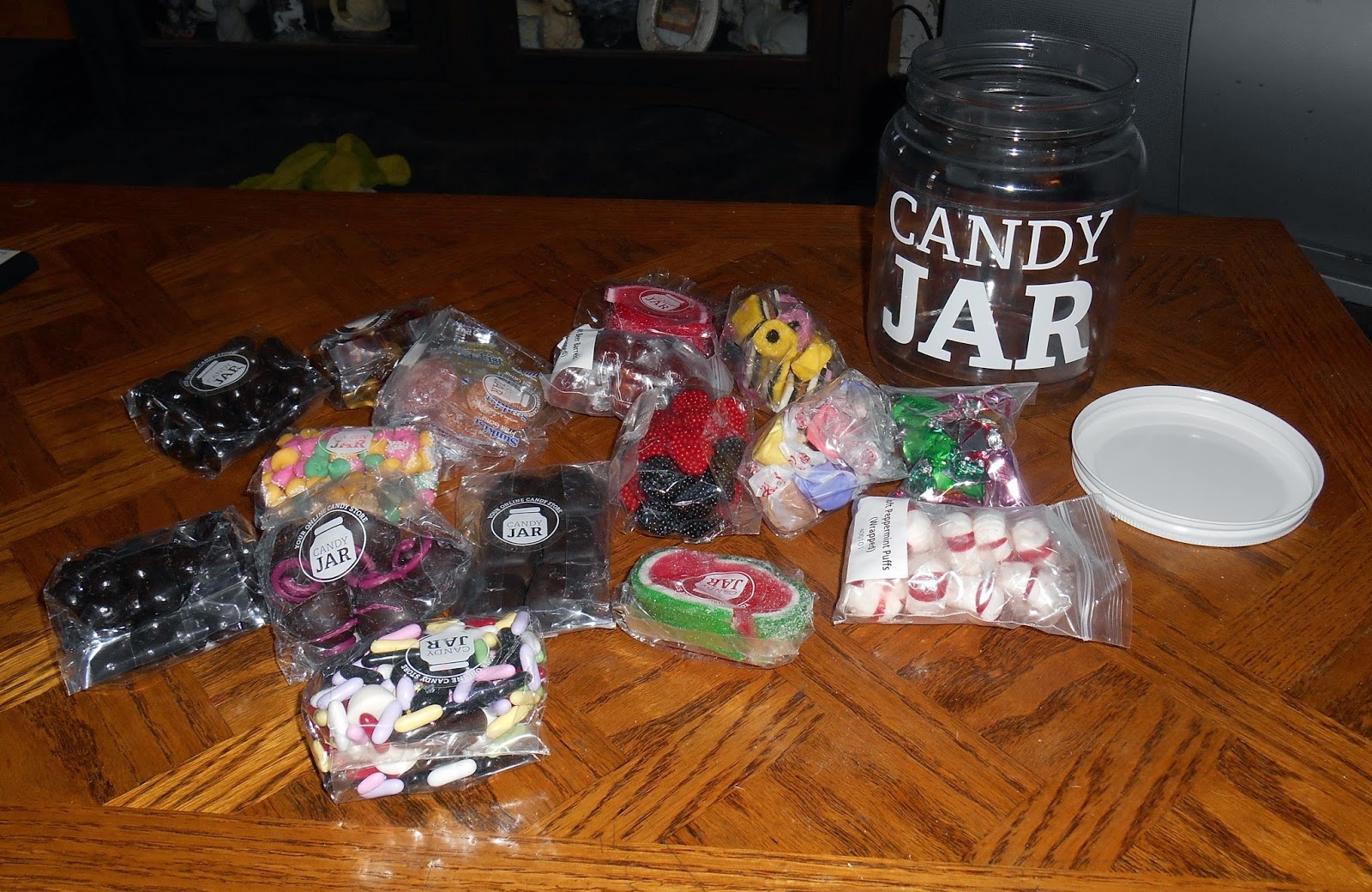 They have page after page after page of candy to choose from, so you're sure to find candies that you'll love. It took me a while to pick just 16 of the candies that I wanted to try because some of them I'd never heard of. If you'd like to visit them and check out what they offer, you can find them on Facebook as well as at their Website.

Posted by Mary Kirkland at 2:30 AM 9 comments

Medical Marijuana has been legalized in several states and while that might be good for the people suffering with debilitating illnesses who need it, it's come with a bad side effect- dogs are ingesting the marijuana, getting sick and sometimes dying.

Marijuana poisoning is getting to be a real danger to the pets of medical marijuana patients, it can can cause the shakes, loss of motor control, lethargy and vomiting. Sometimes the dog can be treated and is fine, other times though the dog is not so lucky and dies.

If your dog is exhibiting any of these signs or symptoms you should get your pet to the veterinarian right away. If you know that marijuana ingestion may be the cause, it's very important to let the vet know this right away so they can give your pet the right treatment.

How Many Cases of Marijuana Poisoning in Dogs Are There?
According to CBS Denver, "Vets say they used to see dogs high on marijuana just a few times a year. Now pet owners bring in doped-up dogs as many as five times a week."

That's quite the increase. Pet owners should know when they bring marijuana or the marijuana edibles into their home when they have a pet, that these substances can be life threatening to their pets. It should never be left out in the open where a pet can easily eat them.

Think of your dog as a small toddler because that's the mental equivalent of a dog. Just like a human toddler, dogs will get into most anything left out where they can get into it.

Marijuana, just like any other drug needs to be kept up and out of reach of kids and animals for their safety.

According to CBS In Denver, "Meola is a veterinarian at a Wheat Ridge clinic. She coordinated a five-year study that shows the number of dogs sickened by marijuana has quadrupled in Colorado since medical marijuana was legalized. Most dogs survive, but not all. "Two dogs, however, got into baked goods with medical grade marijuana butter in it, which presumably seems to be more toxic to the dogs, so we did have two deaths,"

Some people who use medical marijuana think it's funny to get their dogs, "high" but the fact is dogs don't experience the same 'high' that humans do. Marijuana ingested by dogs, causes neurological toxicity and is not fun for them.

Doctors say the real issue is with the edibles items. Dogs are eating things like cakes, cookies, brownies and suckers that are all laced with marijuana.

A responsible pet own would not give their pet a substance they they know could cause harm or even death and in most cases this is not done purposely but leaving a toxic substance out where an animal can get it and eat it is as bad as leaving it out if you have a toddler in the house. Both can be harmed by it, so it's up to you as the pet owner to make sure any marijuana or marijuana edibles are not left out where your pets can get them and eat them.

Those people purposely attempting to get pets high as a joke are under the mistaken belief that marijuana is not dangerous to dogs. I think it's now been proven that they are very much mistaken.
Posted by Mary Kirkland at 12:00 AM 5 comments