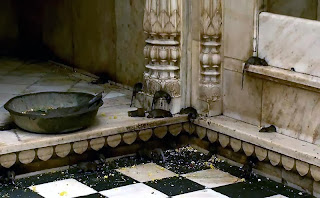 National Geographic did a great article and video of the rat temple in India, which you can find here.

According to the video there are over 15,000 rats inside and people come from all over to sit, eat and just be with the rats. Inside this temple the rats are considered sacred and are protected, pampered even. They are fed milk and in the pictures I've seen they are brought food to eat. People come to the temple to pray to the Goddess Karni Mata. The rats are considered a form of the goddess and they are worshiped by some of the people. Some of the people there believe in reincarnation and they believe that when they die they become rats and when a rat dies they are reborn as humans.

In order to go into the temple, you must remove your shoes so you don't squish the rats. Since there is just one person who scoops up the rat feces, if you go there you will be stepping in rat urine and feces. But after you are done, you can wash it off, so I wouldn't let that stop me. Some people are afraid to go in at first but once there as you can see from the video, they are laughing and loving the interaction with the rats. And it looks like the rats really enjoy the interaction as well.

If I traveled and found myself there, I would definitely go there and visit the rats. I can't imagine a place that I would like more than sitting around with more than 15,000 rats who are used to being around people who treat them really well.

So tell me, would you ever visit a place like this?
Posted by Mary Kirkland at 9:30 PM 10 comments 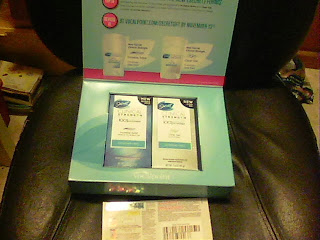 This week I received: So much that I had to take two pictures! 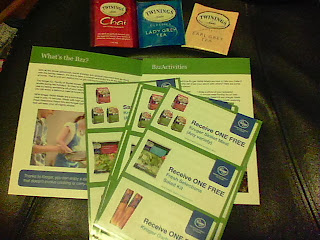 From the first picture:

I received a surprise box from Vocalpoint that contained 2 full size Secret Clinical Strength Deodorants and a coupon for another full size product.

From the second picture:

BzzAgent sent me coupons for three full products..a bag meal, salad and bread as well as other coupons to use on my next purchases.

I also received three tea bag samples from Twinings. I found the links for this great freebie at Freebieshark and Hey It's Free

If you click on any of the links in this post they will take you to the websites where you can either sign up and can start getting free products or you can find links to some great free samples.