I buy from Amazon all the time and have to tell you this is only the second time in many years that I've had a problem with a seller and this time it was  Ocean Beauty, on the site. I want to say right up front that this is in no way a reflection on Amazon, but on the private seller that I did business with on amazon.com.
Click on pictures to enlarge.

This page has stayed like this since then and it is now May 18th and my order has since been canceled and refunded. I clicked on 'track package' and there were no details available. I gave them the benefit of the doubt and waited for a few extra days after the estimated delivery date and when I didn't get my package I sent them an email using amazon's 'contact seller' feature. 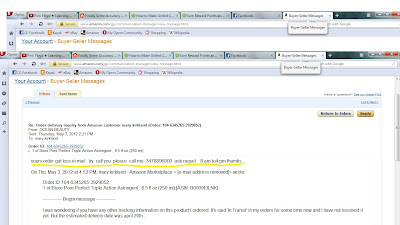 As you can see in this picture I waited until May 3rd to send them an email because I was hoping they would send me an email if there was a problem or the package was mis-delivered. I was giving them the benefit of the doubt that there was just a hiccup somewhere and the package would get delivered since I had that email that said it had been mailed and was in transit.

After contacting them because they didn't bother to contact me and I don't believe they ever would have, I got this email back from them. At first I thought it was a joke. If you don't know what I'm talking about, click on the image to enlarge it. Read the yellow underlined message they sent to me. It looks like a 9 year old wrote that. Completely unprofessional.

But as you can see, it does say that they tried to call me (no they didn't) and that my package was lost in the mail. Meaning it had been mailed, right? Wrong! I called them and talked to Raquel and she told me that my package had never been mailed at all because they ran out of stock and didn't have what I ordered and they would like to refund my money.

I was fine with that. It took about 5 days and my credit card was refunded. I thought that was the end of it. I was wrong. 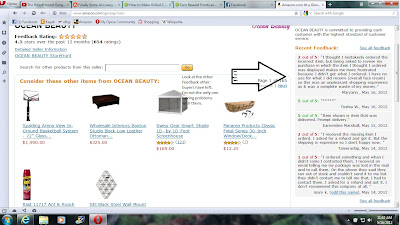 You can plainly see others have been leaving bad feedback for them, I'm not the only one. My feedback is the one on the bottom by Mary K. 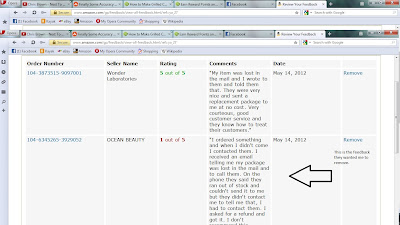 Here's a better look at my feedback. You can also see I left really good feedback for a company that gave me really good service, even when there was a little mix up with the order.

You would think that would be the end of it, right? You can see I left my feedback on May 14th...not 5 minutes after I left that feedback...they called me. That's right, the company I left bad feedback for, called me and asked me to take down my bad feedback and if I agreed to remove it, they would send me a free bottle of what I ordered...when they found one. The man I talked to, hardly spoke English and it was hard to understand what he was saying, but I did understand he told me that they were moving to a new warehouse and he knew they had another bottle of the product I ordered 'somewhere in their warehouse' and when they found it they would send it to me for free. I said ok and thank you. I thought that was the end of it. It wasn't.

On the 16th, I received another call from Raquel. The same woman I had talked to the first time on the phone. She asked me to take down my bad feedback and if I did they would send me a free bottle of another product since they don't have the one I wanted. But could I please take the bad feedback down now.

I told her no. That if I actually was sent the free product, I would take my bad feedback down. That was not good enough for her. She said she would send me a tracking number so I knew I was really getting it and if I got the tracking number, would I please take down the bad feedback. I said no, not until I received the product in the mail.

So I was sent an email with a tracking number and the day after it was sent I saw a package was really sent to me. I waited for the package knowing I wasn't going to get what I had originally ordered but something was better than nothing and they were trying to make up for their mistakes.

I received a package a few days later with something similar to what I had originally ordered and so I took my bad feedback down as I had agreed to. So after 40 days, 2 emails, and 3 phone calls I finally received a product from the company I ordered from, it wasn't the product I had wanted but it was something and it ended up being free. Well, free except for my time, my energy and the stress of having to put up with a company calling me and badgering me to take down my feedback of their company and the lousy customer service I received. 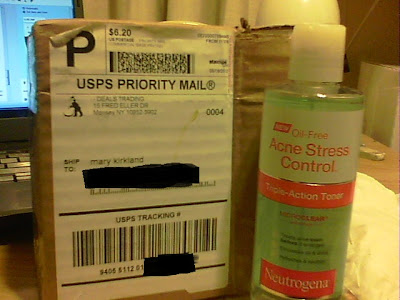 So I looked it up online and found this website about it and a map. Now if I click on the map....it sure looks like a house, not a big company building. It says on the website that they have 1-5 employees. That tells me something, this whole incident tells me something and I don't think  have to spell it out for you.

I made this blog post because it is my opinion that had I not contacted them that first time, they would have kept my money and sent me nothing. No product, no email saying they were sorry, no refund and no free product. After talking with Raquel on the phone that first time and her offering a refund, there was no mention of getting a replacement product for free or asking if there was some way they could make up their mistake to me.

No, it was only after I left bad feedback for their company that they started calling me asking if they could send me a free product and only if I took down my bad feedback. I feel I was bribed. But I agreed to take down the feedback if they sent me the product they offered to, in hindsight I would not make that mistake again, but neither will I go back on my word once I gave it.

In Conclusion:
I made this blog post because I want anyone to know who is going to be doing business with Ocean Beauty on amazon.com to beware. They are unprofessional, unreliable, and you might not get the product you ordered. If you leave them bad feedback you could also get harassed like I was. So make sure to look at the seller's feedback from other's who have bought from the sellers before doing business with them. 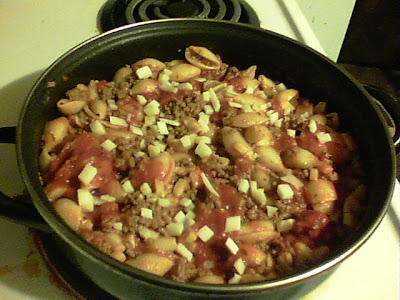 I had decided to try out a few new recipes and this was one of the first. It consisted of boiled shells, browned hamburger meat, 2 cans of no bean chili, a can on stewed tomatoes and a cup of mozzarella cheese. Then I baked it for 20 minutes until the cheese was melted. It was a big hit with the family.
—A member of @NescafeUSA Tasters