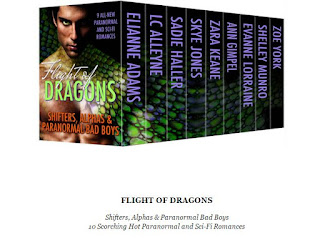 Let your fantasies soar with FLIGHT OF DRAGONS, a collection of 10 scorching romances where larger than life heroes are ready to set your world (and your heart) ablaze. Warning: stories include sexy as sin fire-breathing dragons. The authors will not be held accountable for late nights, lack of sleep, or certain urges that may arise. Let’s turn up the heat!

Stella is a dragon shifter and she has a little problem. If she doesn't mate soon she would be stuck in her dragon form forever. She found him but he keeps running away and she thinks he wants nothing to do with her. She sang at a pub, hoping that he might walk in and she'd get a glimpse of him.

Brycen does want her but he has to do something important first. That is until she forces his hand and he has to go to her. But the woman who he was charged with keeping tabs on isn't who she appears to be and things get all kinds of bad when she shows her true colors.

I love how this story has a great twist at the end of it and it's not one that I saw coming at all, which was a nice surprise.

Balthazar Andal is searching for his dragon scale so he can once again shift into his dragon form. He lost it in a fight with his brother over a century ago.

Eva Haraldsdóttir is an archaeologist who just happens to find an old vase with pictures of dragons on it so of course Balthazar is interested in spending more time with her in order to get it from her.  But before they can spend much time together someone tries to kill her and Balthazar invites her to stay with him. She finds out things about him that should have made her run away screaming but instead she's a fighter and when she's found the right man, she plans to fight for him.

One thing I found fun was the fact that in this story the dragons cannot lie. If they are asked a question, they have to answer it truthfully.

This is a story about three dragon brothers, one brother being greedy and murderous hoping to somehow get their family's dragon hoard of riches. And this brother doesn't care if he has to kill one or both other brothers in order to get it.

Graeme Penrith, Lord Greymoor, Marquess of Iron Hill,*wow that's a mouthful* has a ghost that's always trying to set him up with women so he'll get married. But the ghost didn't know that his heart belongs only to the woman who agreed to marry him years ago. Freya disappeared without a trace and his heart never mended.

Freya was kidnapped by a beast who wanted her for her innocence because bedding her and taking her virginity was supposed to bring back his human form. But Freya gave herself to Graeme before the beast got to her so in a fit of rage and revenge, the beast decided to keep her his prisoner for the rest of her life.

The ghost, while nosy is the real hero of this story. This story has a surly dragon shifter and a couple who just want to be reunited, oh and a great twist that teaches you not to take things so literally!

Ice is a female cage fighter. She's had a rough life and has to keep her emotions in check or she can burn people with her touch. So she's closed herself off and fights in the cage.

Nathan and Dom are bonded dragon shifters. Nathan gets talked into going to a cage fight and that's where he smells Ice and knows she is their mate and a female dragon although she has no idea that's what she is. She has a little too much to drink and things take a turn towards funny. Dom and Nathan take the chance to get to know Ice better and tell her what she is.

Ice travels back to the home of the dragons to get to know them better, she has some awesome thrills rides on the back of a dragon and get to know the guys a bit better. All seems to be going really well and then there's a problem, a big one. But there's almost always a problem that needs to be fixed, right?

I really loved Ice, her character was tough yet underneath she is as vulnerable as anyone else. Nathan was kind of a macho ass but Dominick was fun, loving and fun to read.

I liked this story right away because it's set in Ireland and that's one of the places that if I ever travel, I want to visit.

Lia and her daughter Ash live in a run down apartment. Lia is a single mother and she's doing the best she can to keep her daughter safe but that all blows up when someone kidnaps her daughter and won't give her back until she meets his demands. All the kidnapper wants is for Lia to bring him Seth MacNeil, but she hasn't spoken to him in years so this isn't going to be easy.

Seth doesn't know he has a daughter out there or that she's been kidnapped, until Lia tells him. While he's shocked and angry that Lia didn't tell him sooner, all he wants now is to help Lia safely get their daughter back.

Of course, things aren't always what they seem and this story takes a big twist towards the end that makes all kinds of sense.

Kheladin is a dragon shifter, he's been sleeping underground for a very long time. When he finally wakes up and decides to go above ground, things are totally different from the time he comes from. He must have been a sleep for many years and it's hard to get used to how things are now. Lachlan is the human form of the dragon and he and the dragon talk to each other in their minds. I found this twist on the dragon shifter tale quite interesting.

Maggie finds poor Lachlan looking around like he hasn't ever seen the world as it is and she's right, everything has changed for him while he's been sleeping. Maggie decides to buy him a meal and get him cleaned up and while doing so she gets to know him better.

Maggie is a witch and so is her grandmother. She enlists the help of her grandmother to find out what happened to Lachlan and find out whether the person who sent him to sleep centuries before is still alive. Kheladin is worried that dragons no longer exist since neither he not Lachlan can sense any dragon magic around them.

The witches really take a front seat in this story which I liked. So there's time travel, witchcraft and dragons as well as a sweet romance in this story.

Zaynah is sent by the emperor to a moon that orbits Zenon to find out what is going on there. Ranin Seven is where she is supposed to go and kill the leaders and wait for back up from the emperor but things take a slight turn for the worst when she crash lands on the moon.

Diablo finds her craft and thinks she is dead but takes her to get medical attention anyway where he finds she is part human, part demon and something else they can't figure out. Diablo's brother, Gun seems like he is the more intellectual of the two especially since Diablo is all wrapped up in the mating heat after tasting Zaynah. But she loses her memory and therefore has no recollection why she is there.

Things heat up between her and the two fire demon brother's and then her dragon side makes an appearance. There are other things going on in this story that make it interesting, including a nice twist.

If your into aliens and hot alien sex this this is definitely a story you'll like.

Emma wants Jack and she's going to show him that she wants him. But Jack is a dragon shifter and not looking for a relationship, just a woman now and again to satisfy his needs. He and Emma are both private investigators and they have a case they are working on together but for this case they have to pose as a couple. That's not a problem for Emma, she loves the idea but Jack is afraid of the ramifications.

They have to pose as a couple at a kinky couples resort and between Emma winning sex related prizes and Jack's loss of self control and his dragon wanting to come out for some fun with Emma, the banter and story line between these two was all kinds of fun.

They are at the couples resort to check it out and they find things are't what they seem, trouble ensues and Emma meets Jack's dragon. Jack doesn't know whether Emma will run screaming like others have done or if she will accept him.

Viking monk Bjorn Önnuson wants to lead a solitary life away from everyone and live at the monastery but his life is upended when a beautiful dragon rider swoops into his life.

Britt Andersdatter came to the mountain where the monastery is to ride one of the dragons. She is impetuous, sarcastic and so much fun. She says what's on her mind, can see when she is making someone uncomfortable and pushes them a little more just for the fun of it. I really liked her.

I loved the banter between these two as they rode dragons, talked and got to know one another. She kept him off balance and I think that was what made me really like him. This was a sweet, quick romance and I really liked it.

Barbara has been struggling since her queen died and her dragon went dormant. She turns to Clay for help and because he really wants to be with him.

Without the queen's light, more and more people were giving into the darkness. The pain was just too much to bare without the light to balance things. The elders get a vision that the queen will once again come to them and bring with her the light but until then they tell Barbara that she has to join with her predestined mate. She isn't sure because she loves Clay but fate has a way of working out just the way you need it to.

This was a fun quick read and I really liked it.


It's been a while since I've read a box set and this was a good one. There are all kinds of different stories in this one and I really enjoyed them. I give this box set a 4 out of 5 stars.

Disclaimer: I was given a copy for free in exchange for my honest review.