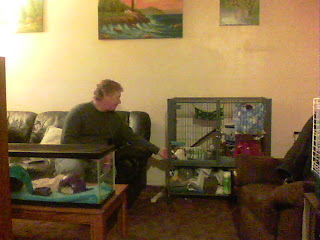 If you've been reading my blog for the past couple of months you know that I adopted 4 rats a while back from a friend and one of those rats, Fang...would not let Ken pet him, especially through the bars of a cage. Fang bit Ken on more than one occasion. I told you about Ken getting bit in this blog post and he has been bitten by Fang, not once, not twice but 4 times. Once on the nose.

Fang didn't want Ken touching him when I was holding him or petting him and when Ken would come over to pet him while I was holding him, he would turn away or nip him. I think Fang thought Ken was competition for my affection. So I would hold Fang and have Ken come over and pet him while I petted him too and after a while he stopped turning away from Ken and let him pet him. It took a while longer for Ken to be able to put him fingers through the bars of the cage like I could to pet him, even though he would come and sit over by the corner of the cage and look at him, if Ken put his fingers in there, he would get bit.

As you can see, fang likes coming over to the corner now and getting petted. Ken also gives him little bits of whatever he's eating, so that didn't hurt. LOL

Fang and Ken are now buddies.

Posted by Mary Kirkland at 1:30 AM 4 comments