Weird Things Around My Apartment

A while back my friend Anna, at Herding Cats & Burning Soup made a post about things around her house. I loved the idea and stole it from her for this post. lol Thanks, Anna!

So if you were to walk around my house there might be a few things that stand out as strange, nothing I'd classify as outlandish but maybe a bit weird. I never said I was normal...let's just get that out there, okay? 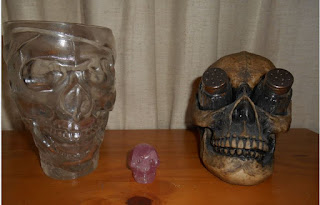 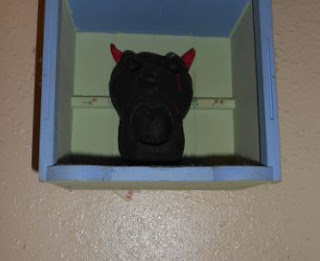 A devil mask is sitting on one of the shelves my daughter made. She made it when she was a kid and it's been there for years. I'm guessing some of my weirdness rubbed off on her since she could have made anything and decided a devil was a good thing to make. lol 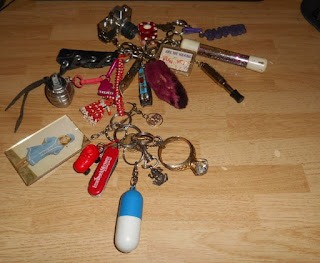 I started collecting keychains about 27 years ago when I worked in a gift shop here in Las Vegas. The little camera at the top of the picture has pictures of different Las Vegas hotels that you can click through. That was one of the first keychains I bought. The Las Vegas nail clippers was another and then I just kept getting ones that I liked. There's a big diamond ring, pocket knife,  roller skate,  pill keeper,  hand grenade lighter,  beaded spanish dancer,  rabbits foot, whistle, leather lighter coat, The word super, dice, piano, frog, a cylinder filled with oil and glitter, and keys that I have no idea what they go to. 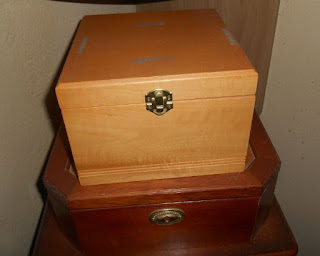 The top lighter colored wooden box was what my mother in laws ashes were in for her funeral. After Ken and his family scattered her ashes, they gave the box to me. I put some of the jewelry I inherited from my mom when she passed away, into the box. 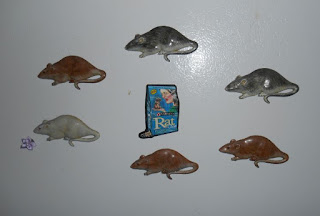 On my fridge you'll find rat magnets and in the middle in a magnet that says Purina rat chow on it. 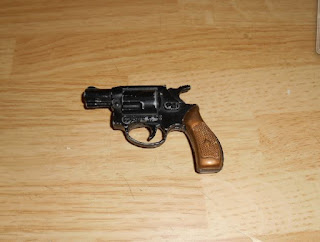 Now if you opened up my hall closet there are a few strange things in there. I have a mini gun (not a real gun) that my dad gave to me about 30 years ago. 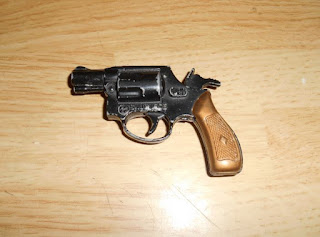 In this picture you can see the hammer cocked back and when I pull the trigger the hammer slams forward and makes a loud pop. 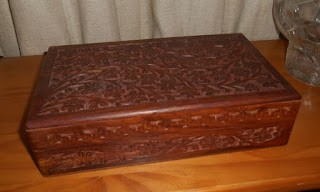 Just inside the hall closet is this ornate wooden box. I thought it looked really cool when I bought it some years ago. 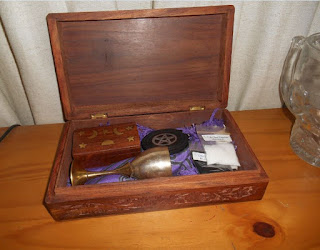 Inside it are some of the things I used to use when I was a practicing Wiccan many years ago.

20 years ago when we first moved into this apartment, I had been flipping through a magazine and found this picture. I wanted to frame it and put it on the wall but Ken said hell no. LOL So I put it on the back wall of the hall closet and it's been there for 20 years which is why it's so faded. It's a picture of a mermaid chowing down on a strange fish. If you want a better look at this picture just Google Sorayama Mermaid and click on images..it's one of the first pictures on that page. I thought it was a cool photo.

So there ya go. There's some of the weird things you might find around my apartment.

Do you have anything in your home that would surprise someone?