Hey you guys, Sara Humphreys is running a great contest over on her facebook page where you post a picture holding her books and can win another one of her books, Tall, Dark and Vampire plus swag. I posted my picture on her page and would really appreciate it if you would click on her fb page and leave a comment on my picture. The 5 pictures with the most comments by July 1st wins and I would love to win this. The picture I posted on her fb page is below..just look for this pic and leave a comment. Thanks guys! Click here for her fb page. 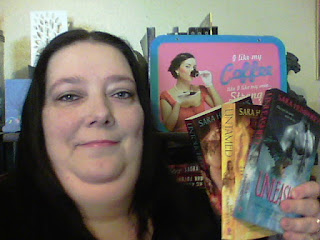 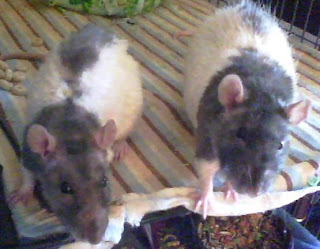 My little guy on the left passed away tonight. He was 3 years old. His brother on the right looks a lot like him. 3 years old is pretty old for a rat and his two brothers are the same age and seem to be in good health so I am hoping they live quite a while longer. 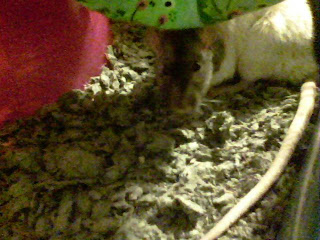 When I first adopted him from a friend, he was really shy and wouldn't let me pet him. He his under the hammock and behind the plastic igloo. 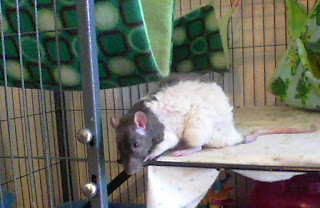 But he warmed up really fast and would run over to the front of the cage when I came over. 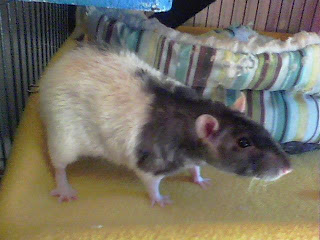 He was the littlest boy in the cage and a very sweet boy. 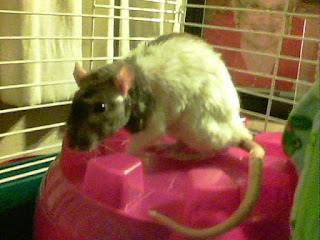 He didn't gain weight like the other two have, he stayed a tiny boy. 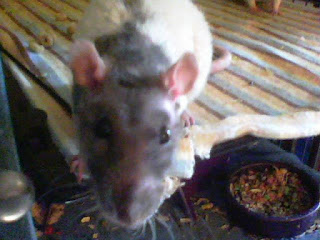 But he was always ready for a treat. "Mommy, you brought me a treat, right?" 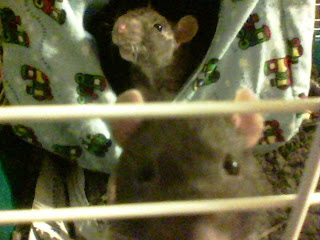 Patches was the boy in the back in this picture when Bandit popped up in front and photo bombed me. 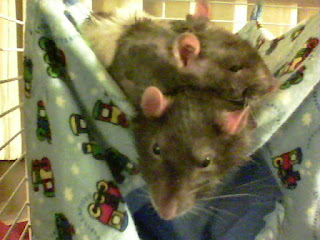 When I first adopted them, he had a brother we named Fang that he cuddled with all the time. Unfortunately Fang passed away soon after we got him. 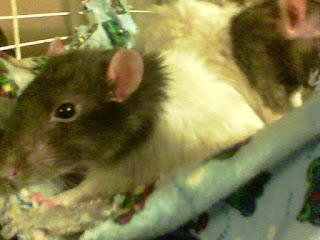 Fang and Patches hung out a lot together when I first got them and I made friends by feeding them both treats while they sat together.

A few years ago I was called by a survey agency a few times and asked if I would be willing to come in and sit in a room around a table with about a dozen other people and talk about a product or TV show. There was a large two way mirror behind us and they told us that our discussion would be video taped and shown to the people paying for the discussion. I would get paid $80 for 2 hours, get a free lunch and coffee and other drinks were always available.

Of course I said yes and went down to their site and one time we talked about a Daytime Soap Opera and what we thought should happen with the different characters. I had a lot of fun with this one and enjoyed it since I was actually watching this particular soap opera back then. It's been a while since I've watched one now though.

Another time we talked about frozen dinners and how they could be better. I think we all pretty much agreed that we would only eat them on special occasions like we just didn't feel like cooking. lol

And yet another time we talked about one of the laws that had just passed here in Las Vegas about it being illegal to give the homeless food if they were in a park. None of us liked that law. I mean if there are people going around on their own time handing out sandwiches to the homeless and they want to do that...why should the police be able to stop them and give them a fine. It didn't work anyway..those people kept doing it and just paid the fines. So it was rescinded and the law is no more. I wonder if us being in that focus group and none of us liking that law had anything to with with the law being over turned?

Have you ever participated in a focus group?
Posted by Mary Kirkland at 12:00 AM 2 comments