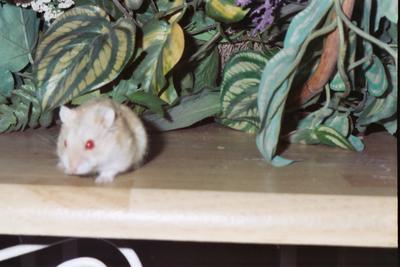 So this is baby, she is a dwarf hamster. About 3 inches long and weighs less than a pencil. lol So I was looking at her claws and just new today was going to be fun cause I was going to have to try and clip them. They were entirely too long. So the first thing I do is get a small plasic bucket and put about 1/4 inch of warm water in the bottom. I have this stuff called small animal shampoo that I added to the water, cause in their old age, well let;s just say that they get like some elderly people and they don't clean themselves as well as they did when they were young . lol And she was a stinky lil thing. I cleaned her cage while my hubby and daughter made sure she was ok in the water. I mean the water barely came up past her paws and she was running around in it. My hubby started cracking up at one ppoint when she ran to the corner of the bucket and threw herself on her back and wiggled her little butt in the water. She would thenturn over clean her face, run to the next corner and flip over again. LOL It really was funny to watch. So after I was done with her cage, I got her out of the water, and dried her off. They don't like to bed cold so we didn't run the air conditioning while she was wet and I took her in the bathroom and put her in the sink on a towel. I got the hair dryer and turned it on cool /low and started blowing some of the air on her from about 14inches back from her. She sat there just cleaning herself until she was dry. All clean, dry and smells a hell of a lot better, let me tell you. lol

Next thing...nails.
Yeah laugh..lol Think of this...a three inch ball of fur that can bite the hell out of you if she don't like what you are doing and trying to keep her still long enough so that when you clip down on the nail clippers you don't accidentally clip off a toe. But i have gotten good at this. hehehehe i have a small piece of wire cage that I hold and stick a piece of cheese through the other side so she puts her paws on the wire cage and eats the cheese with her claws nicely sticking out the other side. I just wait until she isn't moving and I can get a good piece of nail and cut. Works on the front paws but not the back ones. For that I needed help. I have my daughter give her some pudding on a spoon and I carefully clip the nails that are sticking over my daughters fingers as she eats her pudding. LOL All that took 3 hours. My day is done.
Posted by Mary Kirkland at 3:24 PM 0 comments