We Repainted The Bathroom

A while back I posted pictures of my new pretty green bathroom walls after we repainted the bathroom. I bought a really cute frog shower curtain that matches my walls but I needed a few more green things to accentuate the new pretty green walls. So I made a few things. 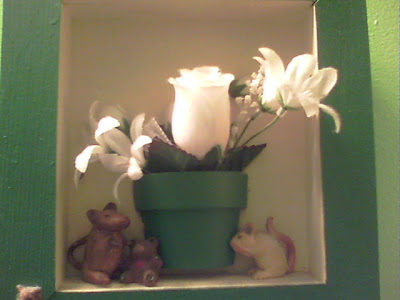 I bought this little wooden flower holder at Joannes and painted it green to go with my new walls. I also bought the pretty white flowers to use in it. I had the little white mouse and tiny teddy bear but the brown mouse on the far left, I made out of sculpy clay. It was my very first attempt at making something out of sculpy clay. lol 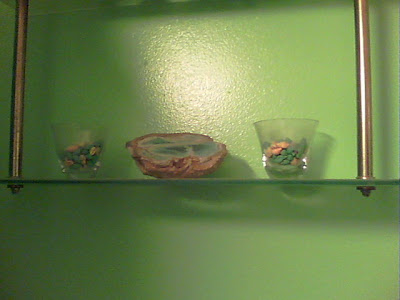 I had some small sea shells and these little glasses. So I painted some of the sea shells yellow and some green and mixed them in the glasses and put them on this glass shelf. The rock in the middle is a rock my dad gave to me that his father, my grandfather found while he was rock hunting way back before I was born. It's a super pretty green geode of some sort of rock, but it's green and matched the walls, so it's in the bathroom now on the shelf. 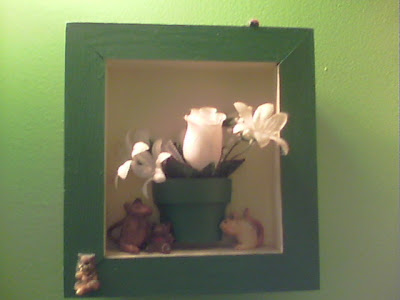 Here's a pictures of that flower pot. When I bought it, it was an unfinished, unpainted wooden box. That little thing on top is a tiny wooden lady bug I bought and glued up there. I thought it was cute. 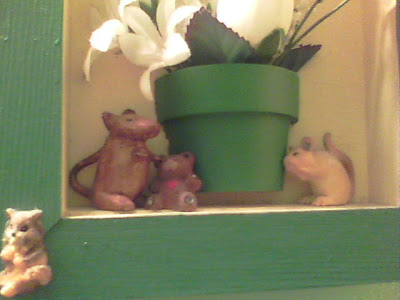 I even glued on a small animal pin I had to the bottom. I took the pin off the back of it and glued him right there in the corner. Not exactly sure what kind of animal he is, might be a gopher..lol But he's cute.

—A member of @NescafeUSA Tasters

Posted by Mary Kirkland at 6:05 AM 1 comments

Are You A Marsupial?

If the answer is no and you don't carry around a huge purse big enough to carry a gallon of milk and a loaf of bread in...you probably expect to get a plastic or paper bag when you buy those things. Right?

So then why do the cashier's or bag people ask the silly question, "Would you like a bag with that?" Like we're going to suddenly stop, take notice of our empty hands and say, "Why no, I think I'll try to carry the milk by the handle even though it's 45F outside and the milk is freezing cold and I might have frost bite by the time I get home, but please don't let that stop you from asking me if I want a bag with that." Not to mention the poor loaf of bread is going to be a squished mess by the time we get it home after having to juggle the freezing cold milk from one hand to another and try to make sure the bread doesn't get squashed in the process.

So cashiers and bag people, here's a little heads up for you.
1. If I don't have my own reusable bags with me.
2. I am not carrying a purse big enough to store the titanic in.
3. I don't look like a Kangaroo with a pouch to carry my groceries in.
4. My entire purchase consists of a pack of chewing gum or a pack of breath mints.

Is this not common sense?

Do you get charged for each bag you give away to a customer or something? Have you given the bags names and are sad to see them go? Have you had a bad bag experience and touching the plastic gives you PTSD type symptoms and you're afraid you'll lose your mind in front of me? No? Then what the heck is the problem..just bag up my groceries and let me walk out without asking me if I would like a bag..because of course I want a bag.

Now in the event you get one of these weirdo, "I'm not giving you a bag unless you beg me for one" type of cashiers...please do the following when they ask if you'd like a  bag with that.

Lean over very slowly into their space and whisper to them, "The bags come alive and smother you in your sleep, don't they? That's the only reason I can think of that you'd ask me if I want a bag for my groceries. I'm right aren't I?" Then look the person up and down and shake your head as he hands your bagged groceries to you. As you are walking away you should also turn around and hold up the bag for him to see and point at it and then at him and then just quietly walk out of the store like nothing has happened.

The next time you go in the store, go to the same checker...I can almost guarantee they won't ask you if you want a bag with that.
Posted by Mary Kirkland at 4:30 AM 1 comments