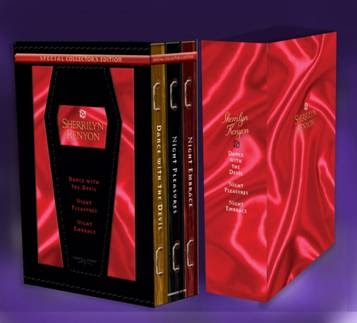 It’s time for another giveaway! Hurray! Today’s giveaway features my all-time favorite author Sherrilyn Kenyon here at Dark Thoughts and I'll be hooking up one lucky winner with a free copy of the audiobook! See below on how to enter.

NIGHT PLEASURES
He is solitude. He is darkness. He is the ruler of the night. Yet Kyrian of Thrace has just woken up handcuffed to his worst nightmare: An accountant. Worse, she's being hunted by one of the most lethal vampires out there. And if Amanda Devereaux goes down, then he does too. But it's not just their lives that are hanging in the balance. With the fate of the world in their hands, Kyrian and Amanda are all that stands between humanity and oblivion. Let's hope they win.

Talon was an ancient Celtic warrior who made a big mistake—he killed the son of a Celtic god Camulus. Camulus swore vengeance, claiming that no one Talon loved would be safe—they all would die horrible deaths in front of his eyes. When, after everyone else he loves has dies, Talon’s sister is murdered in front of his eyes, he barters his soul to Artemis for the chance to protect strangers from the vampires that stalk the night. Two thousand years later in modern-day New Orleans, he meets Sunshine—a woman who, against his will, makes him love again. Of course, it’s Mardi Gras, and New Orleans is filled with vampires, Dionysius in the middle of a complex plot, and Camulus as his confederate. Now Talon and Sunshine have to block the gods, and somehow figure out how to break the curse. Or Sunshine will be the next to die…

DANCE WITH THE DEVIL

They say even the most damned man can be forgiven. Zarek, a man who endured a lifetime as a Roman slave, and 900 years as an exiled Dark-Hunter, never believed that until the night Astrid opened her door to him and made that feral beast want to be human again. Made him want to love and be loved. But how can an ex-slave whose soul is owned by a Greek goddess ever dream of touching, let alone holding, a fiery star?

Sherrilyn Kenyon is the brilliant author of this series. The 20th book in this series just came out not too long ago and I reviewed it here.

So it goes without saying that if you haven’t checked out the Dark Hunter series, you totally should.

GIVEAWAY DETAILS
To enter into the giveaway all you have to do is leave a comment here with your email, so I can get in touch with you if you win and you are entered for this giveaway! How easy is that! US residents only. I will pick the winner on September 25th!

Added note: the winner has 48 hours to respond, if they don’t within that time then the book goes to someone else, so make sure to check your email on the 25th of September!

Disclosure: This free audio book is being provided by Macmillan Audio.

Posted by Mary Kirkland at 8:00 AM 2 comments