Review: To Have and To Master by Sparrow Beckett 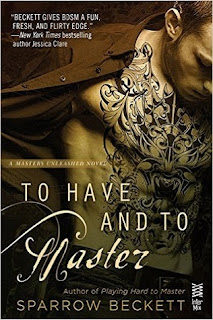 Konstantin, a powerful Dominant, is used to fast living and wanton submissives. But after years of his grandmother haranguing him to marry, he agrees to meet a girl from her rural Russian village. Naturally submissive, Varushka turns out to be everything Konstantin wants in a woman.

At first her innocence is disturbing, but her enthusiasm for life captivates him. When their relationship becomes a mutual seduction, Konstantin introduces Varushka to wicked pleasures she never imagined. His attentive care wins her absolute devotion. However, when Varushka’s father finds out about Konstantin’s past, he whisks her back home to Russia.

Will Konstantin fight to reclaim her, or will his guilt convince him to relinquish the only woman he’s ever loved?

I've enjoyed this series so far so I decided to go ahead and read Konstantin's book as well. We don't really get to know Konstantin too well in the series up to this point so I have to admit I was curious about him and his agreement to meet someone his grandmother picked out for him to possibly marry. It made him interesting, that's for sure.

Varushka constantly surprised me and surprised Konstantin too and it was absolutely hilarious a few times because some of the things she did he just wasn't expecting. And then Konstantin's grandma surprised him and his shock over what she says to him just made me laugh.

When Verushka's parents trick her into coming home to Russia and tell her that they no longer give their permission for her to marry Konstantin, she's heartbroken but determined to change their minds.

I really like how this one ended. I think this might have been my favorite of all the books I've read in this series so far.