This week this guy in the truck pulled up Friday night at 11pm. Of course this was taken from my bedroom window. Why does everyone seem to pull up right here? We heard him out there tinkering around all night. I took the pictures Saturday morning and he's still there today (Sunday). He keeps pulling stuff out and putting it all over the sidewalk and then putting it away and pulling more stuff out. The back of this guys truck in a disaster waiting to happen. It's full and I mean full!

Here's a little closer picture. His truck is packed! Even inside the truck is packed with stuff. There's hardly enough room for him to sit in the drivers seat. If he doesn't leave by Monday morning I know the manager will tell him to leave because he keeps making a big mess on the sidewalk. I have no idea what the heck he's doing. 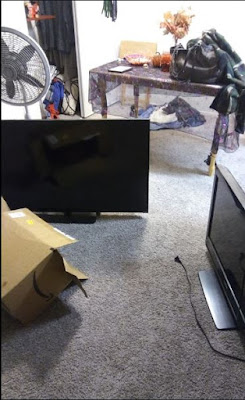 Last Monday night my daughter was getting home after coming over to my place for dinner and she law a light turn on in her apartment. She called her son's father to see if it was him since he has a spare key and it wasn't so she called the police. The police got there in 5 minutes and caught some guy ransacking her apartment. He was arrested and she's pressing charges. Her front door wasn't kicked in so the police believe the guy scaled the wall and climbed the wall to her balcony and got in that way. She didn't have her balcony door locked since she lives on the second floor she didn't think anyone could get in that way but he did. She took pictures after the police were done taking pictures and doing their investigation. They guy had unplugged both of her tv's and set them in the living room. 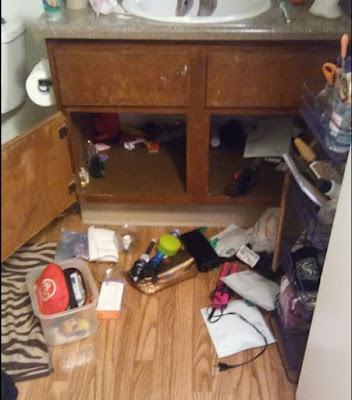 He went through her cabinets and tossed everything around. 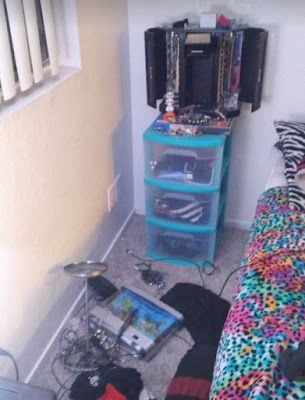 He looked through all of her jewelry boxes and knocked the necklace holder on the ground next to her bed.

He didn't get away with anything and nothing was broken so she's glad about that. The police told her he had a large knife on him too so she's really glad she saw the light come on and called the police. It's not just my apartment complex that the craziness happens at.

Yesterday around noon I heard the police helicopter flying over. Then I heard on a speaker phone for all residents to stay in their homes.

I look out my bedroom window and there was a line of police cars on my street. 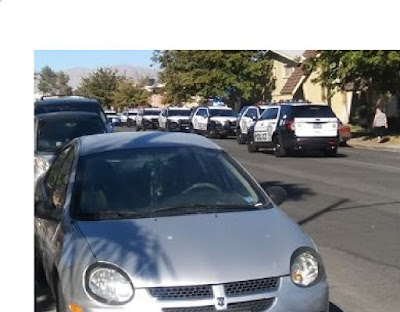 I counted 9 police cars just on my street.

They blocked off my street. 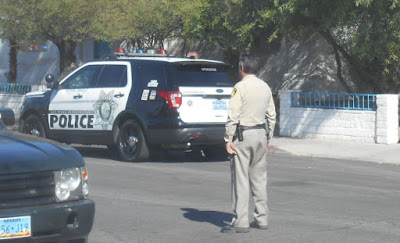 Had police standing in the street.

Put police tape across my street. The tape broke as I was taking the picture.

But the cop got it back up right after. 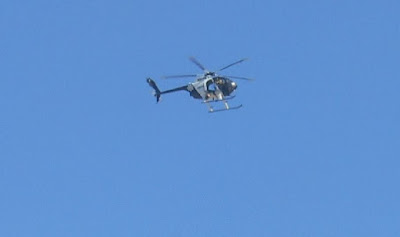 I was even able to get a picture of the police helicopter flying overhead. I found out afterwards that some guy in the courtyard right next to mine in my apartment complex had a handgun out and he was outside waving it around. People in that courtyard called the police and they came fast but the guy barricaded himself inside his apartment for 45 minutes before he would come out. I kept hearing the police telling him on the loudspeaker to come out with his hands up and he refused. 45 minutes later he finally came out and they got him without incident.

Now in that time I had my 6 year old grandson at my apartment while my daughter did some grocery shopping. When she was done and tried to come back to my place, the police stopped her in the alley and had her huddled behind a police car until the guy came out. 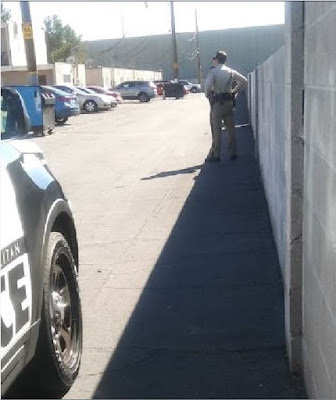 So while she was huddled down behind a police car, she took a picture of the officer standing in front of her.

So that's it for this week's Apartment Hell  Life! Be sure to come back next week for more.
Posted by Mary Kirkland at 12:00 AM 51 comments