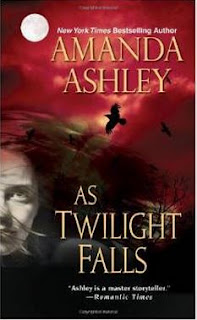 Book Description
Photographing ghost towns across the American West, Kadie Andrews takes a wrong turn and ends up in Morgan Creek--a spot that isn't on the map. It's a quaint little place, but there's something off about its complacent residents. And when twilight falls, it takes on a truly sinister air. . .

Unable to run, or to find any way out, Kadie finds herself a prisoner, hunted for her blood. Still more disturbing, her spirit and beauty have captured the attention of master vampire Rylan Saintcrow. When he looks into her eyes, she can see his hunger. When he takes her in his arms, she can feel his power. When he presses his lips against hers, she can taste his need. Saintcrow may be the most compelling creature she's ever imagined, but Kadie knows in her heart that he is also a man. A man who needs a woman. To want him, desire him, crave him. To be his willing prisoner--for all eternity.. .

My Review
Oh dear, I do love a vampire romance book and I was already a huge fan of Amanda Ashley's books so when I saw this one I knew I had to read it and I'm so glad I did.

Kadie Andrews is a freelance writer and photographer who likes to visit and document ghost towns but when a wrong turn leads her into a small strange town where she finds herself stuck because there's no gas station or cell service, she finds herself in danger from Master Vampire, Rylan Saintcrow.

Rylan had been resting and healing underground for thirty years after being set on fire by hunters, but he awakens to the new scent of Kadie and he wants her too badly to stay underground any longer. He set up this town so that he and other vampires who wanted to be there could be safe from the vampire hunters, it was a safe haven for the vampires. But the humans that were there were virtually kidnapped and were never allowed to leave once they accidentally ventured into town. Serving only to be meals for the vampires who took up residence there.

I like book clubs so when Kadie is invited to a book club of sorts at the library and they start talking about Salem's Lot by Stephen King *one of my favorite books* I was giddy with excitement. Can you imagine sitting around a table in a new town and having the women tell you that, ' Oh by the way, this town is a lot like that book Salem's Lot because it's run by vampires!'. I'd either have a lot of questions or think every one of them was nuts. But it all starts to make sense to Kadie.

The vampires for the most part are nice, yes they take what they want and trap humans in this town to feed off them, but they are nice about it..for the most part. Of course there has to be that one or two that ruin it for everyone. The one thing I did feel bad about was the humans who got stuck in the town and had families that they never got to see again, especially people with little kids.

Rylan falls for Kadie, he falls hard. He's never met anyone like her and he does things for her that I never expected. There was passion and sex but it was more romantic sex than 'throw you down and make you scream-sex', which for this story really was a better fit. Rylan was surprisingly gentle, sweet and romantic for such an old vampire.

I loved the ending, I think it ended the way I would have thought a book like this would.

If you'd like to buy this book, you can find it here.
Posted by Mary Kirkland at 12:00 AM