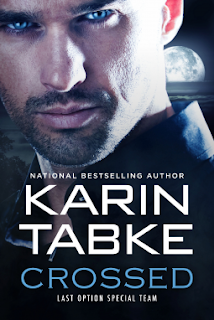 When falling in love is the most dangerous option of all...

Brutally assaulted and then heartlessly betrayed, L.O.S.T. operative Jax Cassidy lives life on her terms. No friends, no family, no love. But when she comes face to face with assassin, Marcus Cross, the man she has been ordered to eliminate, she discovers his deadly secret. A secret that draws her into his dark world, jeopardizing not only her heart but her soul.

Marcus Cross sold his soul to the devil for a second chance at life. When dangerous beauty, Jax Cassidy's life is threatened by the one thing that can destroy them both, Marcus must make a bitter choice--her death or his.

It’s Jax Cassidy’s first mission for L.O.S.T.—one that will give the former cop who went rogue a chance to prove herself. Her assignment: gain the trust of assassin Marcus Cross . . . eliminate him . . . then take down Marcus’s mentor, Joseph Lazarus, a man with a bold eye on the White House. But the woman who’s known by her team for being a femme fatale succumbs to passion, only to discover Cross’s deadly secret. He’s a vampire, and Joseph Lazarus is his creator.

Left for dead by his platoon in the violent hills of Afghanistan, Special Ops sniper Marcus Cross was given a second chance at life. His newly heightened skills make him the perfect killing machine, and as Lazarus’s right-hand man, he’s quickly rising to the top of his dark empire, purging enemies with speed and precision. Only when Jax Cassidy is sent to bring him in does he begin to question Lazarus’s motives and his own actions. But when Jax’s life is threatened by the one thing that can destroy them both, Marcus must make a bitter choice—her death or his.

Jax is new to the L.O.S.T special ops organization after she was beaten, left for dead and got her revenge. She had been a cop and is now an assassin for this organization.

Marcus has a lot of secrets and if Jax finds about about them she may or may not like him. He's a vampire who now kills for Lazarus. He had been a soldier when Lazarus found him almost dead and turned him. He has been working for a special ops team called The Solution run by Lazarus.

This book has no shortage or blood, murder and mayhem. The carnage starts right off from the start of this book. Marcus had been led to believe he was working for the good guys and doing the right thing but he was wrong. He slowly figures out what's really going on and why and that's when he changes his mind as well as the way he does things. Lazarus's special ops project had its funding cut off by the senator that had been backing it when he figures out that some things just aren't right. When he does that L.O.S.T. gets hired to keep the senators daughter safe from Lazarus.

When Jax and Marcus start to get closer, they can't seem to keep their hands off each other. I really liked these two when they got together. She was sent there to get closer to him so she and her team can bring down Lazarus but her feelings have changed since meeting him and getting to know him.

I love a paranormal romance and vampires are one of my favorite paranormals but we don't see Marcus use his vampire abilities a lot in this book. This is more of a romantic suspense book than a vampire romance, at least it was to me and I'm fine with that. There's a lot of action, drama and romance in this to keep you completely engaged from the beginning until the end.

Disclosure: I voluntarily read and reviewed an advanced copy of this book from NetGalley. All thoughts and opinions are my own.