In May of this year Ken and I heard a lot of yelling and screaming from across the street. We were looking out our bedroom window and saw the people in that courtyard running up and down the stairs and going into other apartments. Within 5 minutes of this happening, the first police car pulled up and they ran over to the stairs with their guns drawn. 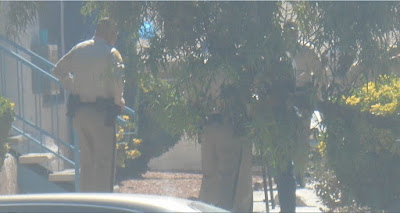 They brought a few people down stairs and talked with them for a few minutes.

A minute or so later, several more police cars showed up and ran over to the stairs and more people came down to talk with the police.

The police stood around talking to everyone for a few minutes.

Then the fire truck and ambulance pulled up and went up stairs. But they all came back down stairs within a few minutes and left.

Ken talked to someone that lives over there a little while later and found out what happened. One guy got out of prison and was living with his mom and brother. They all got into an argument and the brother who just got out of prison pulled a gun on the mother. She came down stairs and called the police on her son. But when the police came they couldn't find the gun and so no one was arrested. But because she said he had a gun there were over 9 police cars that responded on this street and in the alley behind them.

Earlier this week my neighbor started screaming. Then she and her boyfriend ran out to the alley. She said the two guys that had been at her door pulled a gun on them and when she screamed the two guys took off. I saw the whole thing go down from where I was sitting and Ken had been outside and saw the two guys running away. She said she was calling the cops but an hour and half went by and no cops showed up so I'm guessing she didn't call. It was probably a drug deal gone bad anyway. Everyone's door came bursting open when she started screaming.