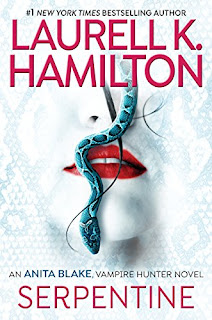 Vampire hunter Anita Blake has always managed to overcome everything she faces. But this time there’s a monster that even she doesn’t know how to fight...

A remote Florida island is the perfect wedding destination for the upcoming nuptials of Anita’s fellow U.S. Marshal and best friend, Edward. For Anita, the vacation is a welcome break, as it’s the first trip she gets to take with just wereleopards Micah and Nathaniel. But it’s not all fun and games and bachelor parties…

In this tropical paradise, Micah discovers a horrific new form of lycanthropy, one that has afflicted a single family for generations. Believed to be the result of an ancient Greek curse, it turns human bodies into a mass of snakes.

When long-simmering resentment leads to a big blowup within the wedding party, the last thing Anita needs is more drama. But it finds her anyway when women start disappearing from the hotel, and worse, her own friends and lovers are considered the prime suspects. There’s a strange power afoot that Anita has never confronted before, a force that’s rendering those around her helpless. Unable to face it on her own, Anita is willing to accept help from even the deadliest places. Help that she will most certainly regret—if she survives at all, that is…

This is one of my favorite series and I'm glad I finally had the time to sit down and read this because it really did add to the series. If you've been enjoying this series then I suggest you give this one a go as well.

Anita always seems to find herself in hot water or some kind of trouble and this is no exception. You would think that she could take some time off for the wedding of her best friend, Edward but no. Not when bad things start happening.

I was wondering at the title and then I got it. I must not have read the blurb too well because it's right there! lol I don't mind snakes, one snake at a time but a mass of snakes might be too much for me to imagine. Micah went around the country with the Furry Coalition who helped lycanthropes with problems and newly turned Were animals with their new condition. Micah is away on business looking into a new kind of shapeshifter, one that weirdly shifts into snakes. He's off trying to help this family deal with what the family thinks is some kind of curse before he has to leave for the wedding. But he's not sure they can help this family since it's unlike anything they have ever seen.

The main story in this book is the wedding and of course there's drama all around them. Dixie is a friend of the bride but she hates the groom to be and wants to stop them from marrying. She's a complete bitch about the whole thing. Then one of the guests end up murdered and that sets a whole other set of problems, including a cop in the investigation that seems to have an interesting set of gifts that even Anita isn't immune to.

One of the characters that tends to creep into this series every once in a while is Olaf. And when I say creep, I mean, creep. Because this guy, no matter what he's doing is creepy as hell and I love him for it. He's one of the more interesting characters that pop up now and again and we never know what to expect from him but that's probably because he's a serial killer among other things. But when people start dying and Nathaniel gets blamed for the murders, Olaf wants to help Anita prove that Nathaniel had nothing to do with it.

The twists and turns this story took were great. I really liked the snake shifter side of things because it was so different and it tied the whole story together in the end. Of course Anita and her fiances/lovers are front and center and the sex is always a big part of these books but I expect and like that about this series. With so many lovers you kinda have to expect there's going to be a lot of sex in these books.