Eating Blood Sausage For The First Time- My Thoughts 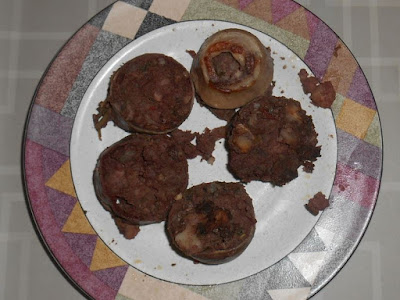 Ever since Marianna's Mexican Market opened up right next door to where we live, we've been trying new foods found in the store. Ken said he saw blood sausage and wanted to try it. I'm not a picky eater and will try just about anything once. So we bought a small pack of it and fried it up. It was already sliced so all I had to do was fry it for 5 minutes on each side. I Googled how long to cook it in case you're wondering. In case you don't know what it is...Blood Sausage is a sausage made with pork, dried pig's blood and suet.

This was pork blood sausage. I don't know if there are other varieties but that's what this one was. When I started frying it, some of the sliced sausages kind of exploded from their outer casing and looked more like a meat crumble. So I only took a picture of the sausages that stayed together.

I don't know what I was expecting when I took that first bite but it's very crumbly and mushy but it had a spicy meaty flavor. Mixed with the crumbly bits are also chunky, chewy bits of something. I'm guessing it was some part of the pig but who knows what parts it was. I was expecting to really hate it but it wasn't awful but because it had a slightly liver flavor to me and I don't like liver it wasn't great to me.

I would suggest taking the casing off after frying because the casing *whatever that was made from* was super chewy.

So while it wasn't awful, the mushy texture and slight liver flavor made it so I wouldn't buy it again.

Have you ever tried blood sausage?
Posted by Mary Kirkland at 12:00 AM