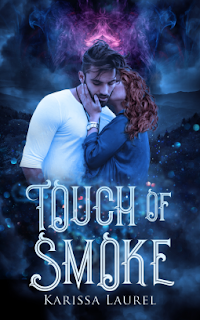 Three years ago, Rikki Albemarle watched her best friend die at the hands of a supernatural evil. Certain she was slated to be the next victim, Rikki fled her small Smoky Mountain hometown, vowing to never come back. Plagued by nightmares and knowing she's the only one who believes Mina's death was no accident, Rikki returns with hopes of finding answers and holding the killer accountable.

Rikki is convinced the key to unlocking the secret of Mina's death lies with Owen Amir, the alluring young army vet who once claimed her heart. But the deeper Rikki digs into Owen's past, the more she's torn between the urgings of her heart and her memories of him on the night Mina died.

After falling further into the rabbit hole, Rikki lands at the feet of an ancient and powerful evil determined to finish what it started years before. To survive, she'll have to make a decision: believe Owen is the monster she always feared he might be or trust him enough to stay and fight for a second chance at love.

Rikki had left Evansville behind never expecting to come back and yet here she was, back once again. She'd left when her best friend was was murdered but she left without a backwards glance, hoping the monsters she's sure she saw wouldn't come after her next. Even though Rikki left, the nightmares stayed with her so she figured the only thing she could do to get rid of them was to come back and get some answers.

This story gives us a lot of back story, a lot of lead up to what happened 3 years ago when her best friend, Mina was killed. The story switches from past to present as it leads up to the night of the murder and Rikki confronting Owen 3 years later. We really get to know the characters who were involved and get glimpses into what felt like the lead up to a paranormal encounter. There are small things that give away that Owen is more than what he appears. I'm sure anyone reading this will see all the different clues we are given about what or who he actually is. At least I thought I knew where this story was going. I was so wrong. I never would have guessed where this story was going but the explanation of what happened the night that Mina was killed was utterly incredible.

This is a standalone book that gives you all the information you need to enjoy a love story, heartache, magic and a reluctant hero. Owen was definitely the hero of this story even though there's a lot more to him than we first expect. The romance between Owen and Rikki was a slow burn, but soon that fire burns so bright it engulfs everyone in the room. This was definitely a sweet romance with an incredible paranormal twist.

Have you ever read a book that you really liked and just want to tell everyone to read and hope that they like it as much as you did? This is one of those books for me. Go read it.

Disclosure: I received this book free via NetGalley but all thoughts and opinions are my own.
Posted by Mary Kirkland at 12:00 AM