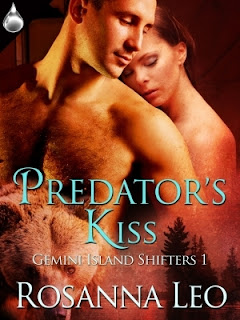 Rosanna Leo weaves a fun, exhilarating tale in Book 1 of her new Gemini Island Shifters series. Thrills, suspense, and humor abound when a rock star brother, stalkers, and a sexy erotica author descend on one ornery bear shifter. Find out for yourself what happens when events conspire to awaken the bear!

Bear shifter Ryland Snow just wants peace. The peace and quiet afforded him at his woodsy retreat, the Ursa Fishing Lodge. As owner of the lodge, Ryland enjoys the tranquil life he’s created among his fellow shifters. He lives to maintain a safe haven for them, away from meddlesome human eyes.

When his rock star brother arrives, bringing trouble in the form of a possible hit man, Ryland is incensed. He’s been cleaning up Soren’s messes as long as he can remember, and is tired of his brother’s lecherous exploits.

Things go from bad to worse when Lia Goodblood stumbles upon Ryland and his lodge. Yes, the reclusive erotica author is easy on the eyes, but the human woman is more trouble than she’s worth. To say nothing of her bizarre fear of furry creatures.

Ryland determines to rid himself of her presence. But when he learns she’s on the run from a crazed fan, Ryland’s protective bear instincts flare. And the bear won’t be denied.

Young shifters go to Gemini Island to learn how to shift fast if the need arises so they can get out of danger. Ryland opened Gemini Island to families in the Summer and he stayed there year round. Ryland liked the peacefullness of the island. His brother, Soren was a famous musician and would be coming to the island for a visit. They weren't as close as they had been when they were younger but they were still brother's and that's what mattered. But Soren only showed up to hide out from the husband of a woman he had an affair with. The husband was connected and put a hit out on Soren so now he needs a place to lay low for a while. Ryland is not happy about this at all.

But just as the brother's are about to fight it out in their bear forms, they both hear a human woman running their way. Lia is scared out of her mind, running from someone that she thinks is after her. She runs through the woods and stops right in front of two huge bears, Ryland and Soren in their bear forms. Lia is crazy afraid of any animals and flips the heck out so they shift back to human which really doesn't help matters any. I'm not sure what this chick was more scared of, the bears or the fact they shifted into humans right in front of her.

Lia is an erotica author and on the run from a fan who's been stalking her. She ended up on Gemini Island and now Ryland is feeling all kinds of possessive of her. She's not completely sure of what she just saw but the brother's let her know that she's not in any danger from their bear halves. While Soren is hiding from a pissed off husband and Lia is hiding from a crazed fan, Ryland and Lia have time to get to know one another and act on the attraction they feel for each other.

There's a twist in this story that I never saw coming but I really liked how this ended and how fun this book was. The banter between all of them was just fun and I look forward to reading Soren's book soon too.