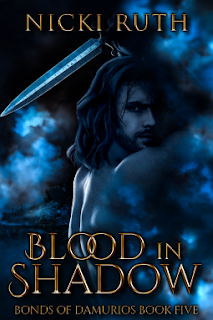 Has the master of shadow finally met his match?

Amir lives for the hunt. The vampire assassin stalks his prey from within the shadows, never hesitating to kill those who stand in his way or threaten his new Queen. His new mission: find the human scientist who holds the key to an antidote that could save his people. But the woman he takes refuses to cower, refuses his demands, and confuses him with new desires that leave him aching to hear her moans as he sinks his fangs into her soft flesh.

Bodi can’t believe her life! Kidnapped by a vampire psychopath, she’s tasked with decoding the mysteries surrounding her father’s toxin. But she has bigger problems. She should be trying to escape the assassin, instead, she dreams of escaping to his bed, of having his lips tease her in ways that leave her gasping. His sexy smiles prove more dangerous to her than his hidden blades and veiled threats.

But Amir isn’t the only one who covets Bodi. Skilled mercenaries have snuck into his territory to find the scientist, and his possessive claim to her means he won’t hand her over without a fight. Yet, Bodi can’t remain his prisoner forever, and soon he’ll need to make a decision. But can he let her go?

Amir and Bodi continue this sexy, sci-fi/paranormal fantasy series. Read in order, or as a standalone. Like the others, Book 5 includes characters from preceding installments, as well as scenes for mature audiences, violence, and lots of fun.

Amir has no choice but to kidnap the scientist and make her create an antidote for the toxin her father made. Bodi doesn't act exactly the way Amir thought she would once he kidnaps her and tells her what he wants her to do and she's attractive which adds another level of complications he wasn't expecting.

These two go back and forth as enemies and then friendly at times while she is working on finding an antidote but Amir's mood swings because of his family problems got tedious fast. This guy brings his bad moods to Bodi all the time and takes his bad moods out on her when she's doing her best to find what he wants. She has feelings for him at times when he's not acting like an ass and is actually being nice to her and then gets her feelings hurt when he's a moody, brooding, bad tempered vampire and starts shouting at her. Amir's personality and maturity does grow as the story went on which was nice to see because I didn't like him that much at first.

There's also another group of people searching for Bodi for some reason so Amir keeps taking her to new safe houses in order to keep her safe while she tries to make the antidote for him. He's got a lot of family problems going on while all this is going on which just added to the drama of this story. The romance between Amir and Bodi actually goes back and forth over a long period of time because Amir doesn't know what he wants. But I really like how this story ended so I was happy to see how things concluded even though I didn't see some of the things that happened coming until they actually happened. It was nice to be surprised by some of the turns this story took.