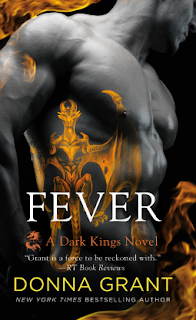 His kiss was fire and passion. She shivered, wondering how he knew just how to touch her, to
send her spiraling into an abyss of pleasure...

For centuries, the Dragon Kings have lived among mortals, forsaking their true selves. But for Kelton, hiding in the realm of shadows—and existing only in the world of dreams—is no longer an option. A human woman claims to know that he, like other dark warriors of his kind, is real. That the legends about these powerful, seductive men with hearts ablaze are true. And that, with just one embrace, Kelton could destroy her…or love her until the end of time.

Bernadette Davies is an anthropologist who knows better than to fall into the arms of a Dragon King. But how can she resist Kelton when he’s so willing to share his secrets and bare his soul? He hasn’t met a beautiful, trustworthy woman like Bernadette in…forever. But once they give into their mutual desire, their worlds will never be the same. Soon Bernadette must face her dilemma: Should she expose the truth about Kelton in the name of science? Or join him in his battle with the dark forces—in the name of love?

The Light Fae Queen came to Bernadette and convinced her that dragons exist and need to be brought to the public's attention. So for over a year Bernadette has been telling people about dragons and how she has proof they exist. She's been looking into Dreagan Industries who she suspects are all dragons so she confronts Kelton, one of the owners of the business. He knows she's being used by the Fae Queen and knows that she might have proof of their existence so he opens up to her and tells her the truth about himself.

Kelton tells Bernadette everything but she knows that's only because he plans on erasing her memories before she leaves so he has no reason not to tell her the truth. I found that a little sad but I understood why she couldn't be allowed to remember anything. Dragons have been in hiding from humans for thousands of years and they know that humans would try to kill or experiment on them if they knew about them. I really liked watching Kelton and Bernadette get to know each other with no secrets between them.

Then there's the crazy Fae queen manipulating Bernadette for her own uses and the huge danger and fight that brought about in the story. There's a missing Dragon King, a crazy Fae queen who's been lying about a lot of stuff for a very long time. Kelton and Bernadette are staying together and getting closer while danger is looming just over the horizon. There were a lot of interesting secondary characters that I have more questions about and hope to see them in upcoming books but Rhi was by far the most interesting secondary character that I want to know more about and want to see again. She is going to be something else but I don't know what and I want to know what kept talking to her or who. It was strange that she kept hearing a voice but I have no idea who it was. I want to know more.

I was on the edge of my seat waiting to see what would happen next because there always seemed to be something happening in this story to move it along. The ending was phenomenal and has me wanting to read the next book in this series.

Disclosure: I was give an ARC of this book via NetGalley but all opinions and thoughts are my own.
Posted by Mary Kirkland at 12:00 AM