You might remember I told you guys about the homeless tent that was set up right outside my courtyard a few of weeks ago. Well they did finally move down the street. They set up their "tent" about a block down the street in between some power boxes. They had 5 people sleeping there for about a week. The police got called out a couple of times but all they did was make them pack their stuff up and move on. They were back that night.

Then the other day a few of the homeless moved about a half a block further down the street and one day while I was out walking Falcor I saw 2 motorcycle cops that were on motor bikes talking to one of the homeless guys that had a sleeping bag out in the rocks. I took the picture from a block and a half away that's why the picture is so small. If you click on the picture it will enlarge it a little. The police drove away after a few minutes and the homeless people are still setting up their tent way down the street. So at least I can walk Falcor without being harassed for a while. A lot of them still come to the drug apartment in my courtyard. I think if the manager evicted them, the homeless would move on somewhere else. I feel bad for them and just found out that my city is building new housing for the homeless which will house around 800 people. They are also getting more help that they can sign up for but I think the ones that are addicted to drugs like some of the ones around here don't usually partake of any of those services so the only thing we can do is get rid of the drug dealers here and hope they move on somewhere else. 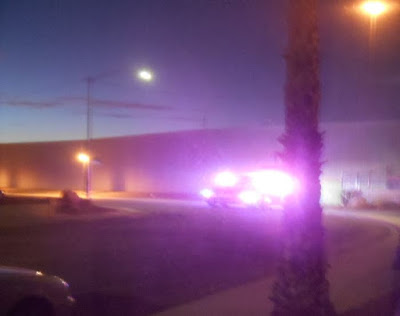 The other morning around 5am we got woke up to someone screaming outside. We got up and heard yelling coming from my courtyard in one of the apartments. A door slammed and it sounded like people were arguing. So I got up, got dressed to take Falcor out. Ken calls me in the bedroom because the ambulance pulls up outside on the street. Of course my camera won't take pictures at night without being 100% blurry so all you get to see are bright lights. But it's an ambulance with its lights on. They stayed for a few minutes and left. No one went to the hospital. I didn't hear any more arguing.

One of these days I'll figure out how to take pictures at night without it being blurry. lol