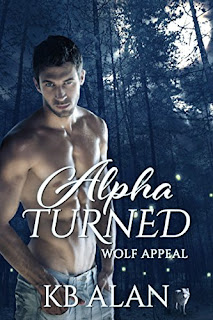 Not all men are bad…

Strong, independent, and happy on her own, Hillary has grown from the naïve person she was four years ago after a brutal rape turned her into a werewolf. The normal life she’s made for herself is only upset once a month when the moon calls to her and she has an uncontrollable urge to turn furry and chase small creatures. And she doesn’t need a man for that. Until she finally meets another werewolf, this one a gorgeous, sexy guy who is determined to change her mind about one furry man in particular–him.

No, some men are very, very good…

The minute Zach scents Hillary he knows she’s the mate he’s been searching for. Though both the wolf and the man are itching to claim her, first he has to convince her that he’s one of the good guys, and that there are certain benefits to being an alpha werewolf. And there’s no better way of making Hillary see that, than giving her himself—body, mind, and soul.

Hillary had thought her boyfriend was just taking her home to meet his family but once there things took a violent turn. She was assaulted by not just her boyfriend but some of his family members as well. She was bitten and turned into a werewolf against her will and when she didn't shift, she was left outside to die. But she did shift after everyone had left and now years later she's making furniture in a small town and holding her own.

Aaron Jenner orders a custom table from Hillary for his brother and when he comes to her shop to take a look at it, she can smell right away that he's a werewolf and is instantly angry and fearful. He can smell what she is as well but is confused by her reaction. They agree to meet somewhere else to talk but when they meet they are both ready to change forms and run...or fight if necessary. It doesn't take long for Aaron to figure out what happened to her and figure out why she's so wary and isn't part of a pack.

Aaron goes back to his alpha who is also his brother and tells him about her. But as soon as Zach smells her scent on his brother, he knows that Hillary is his mate and that changes the entire situation. Aaron and his mate are so nice and try to answer all of her questions and make her feel safe with them before meeting other pack members. Zach is sweet, gentle and takes things slow with her even though Hillary can feel the pull of the mate bond right away. It takes only a couple of days of getting to know Zach to know that he's nothing like the monster that turned her. Because he's her mate and she feels it and feels somewhat safe with him they fall into bed pretty quickly. Meeting the pack and starting a life as an alpha packmate is all new territory for Hillary but she does great.

Then they have to contact the werewolves in charge and let them know what happened to Hillary and how she had been turned. Those in charge make sure to find out what's going on in that pack and make sure the member's of that pack are brought to justice.

This book was so good. Yes, right from the beginning there's a terrible assault and if that bothers you, then don't read this but the book is really about Hillary and Zach finding each other and making a life together and dealing with the other pack.