Review: Bonded To The Dragon by Laxmi Hariharan 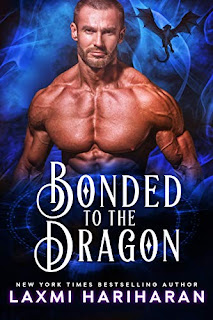 Book Description
Mine to protect. Mine to cherish. She is MINE…
AARON
Hope was MINE from the moment I saw her.
Rule-breaker.
Rebel.
One hundred percent lush female.
The more I learn about her, the more I crave her.
The more she turns me away, the more I must have her.
She fills my every waking thought, permeates my every dream.
She reaches parts of me that no one else can…
I will not let anything happen to her.
Even if it means taking on the deadliest threat to the dragons.
Even if it means annihilating myself.
I will do anything to protect her.
She is mine.
MINE
Are you ready for a roller coaster ride of emotions, with an intense, brooding, warrior and a fiery woman who is more than a match for her fated mate?
My Review
Ever since Aaron lost his twin brother, he's been in a kind of living limbo. Not really living, just mourning and not caring or feeling much of anything. He spends a lot of time at a bar, getting drunk to try and numb the pain he's in. He's a powerful immortal Guardian but nothing seems to matter to him until Hope walks into the bar.
Hope is a dragon shifter and even though she knows that other shifters exist, many of them don't know that dragon shifters still exist. So when a telekinetic Elysian makes a psychic attack on the bar Hope is at, she fights him to the amazement of Aaron. Even more amazing is when he watches her go outside to stop the Elysian because she shifts into a beautiful dragon to do it.
Aaron knows right away that she is his mate but he allows her to fly away when she's done stopping the attack on the bar. But after talking to her in the bar, he's pretty sure he knows where to find her so he goes looking for her and finds her. But a dragon shifter has been taken and by the Elysians and now Aaron is going to help Hope get her back.
The Elysians are losing the abilty to have emotions because they are losing their empaths so the leader of the Elysians comes to ask the council for volunteers to be their empaths or he'll come back and take a few by force. But one of the Elysians goes rogue and decides to take another dragon shifter hostage. It turns out that it's the Elysian leaders half brother and he's been experimenting on shifters. Again, Hope and Aaron go to rescue the hostage but this time things are different because Hope has agreed to mate with another dragon shifter even though she has feelings for Aaron but believes that only another dragon shifter can live through mating with a dragon shifter because of the psychic bond they would create. She cares about Aaron but doesn't want to risk him dying by mating her. Hope's dragon on the other hand seems to think that Aaron is their mate and little by little breaks through the barriers that Hope put into place to keep the mating bond from clicking into place.
What happens next was so beautiful that I don't want to say more but that it brought a tear to my eye. These two belong together for sure and they are both strong people. I loved that Hope was a strong warrior that could fight right along side Aaron and Aaron loved that about her. He never seemed irritated that she was as strong or stronger than he was in certain situations. No, he was proud of her and it sometimes surprised her.
I really enjoyed this story and am looking forward to reading more of this series now.
I give this book 5 out of 5 stars.
Posted by Mary Kirkland at 12:00 AM