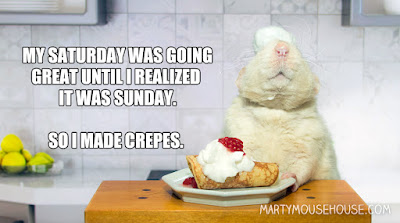 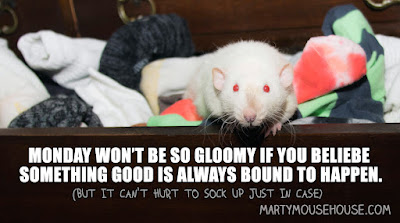 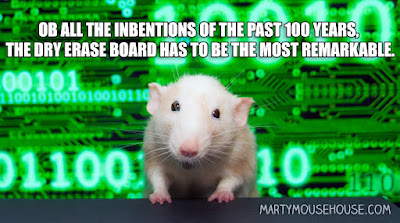 *All pictures this week are courtesy of www.martymousehouse.com*
Posted by Mary Kirkland at 12:00 AM 4 comments

On Sunday night around midnight two people that live at the end of the building across from me were fighting really bad. They were screaming at each other, slamming the door and it went on for a while. The next morning around 10am, I saw these two police cars out front of my building and when I went back in my courtyard, I watched 4 police officers come out of the apartment that had been fighting the night before. I'm actually surprised the people that live next door to them didn't call the police that night. There are two police cars in this picture. One was actually parked the right way by the sidewalk and you can barely see it. One just parked in the street.
----
I got my A1C results back this week. 3 months ago it was 10.1 and now it's 8.5. My doctor is so pleased that I am really trying this low carb diet and my blood sugar numbers are better too. My blood sugar used to be 350-400 and now it's around 160-180. So I was happy to hear that.
My blood pressure is still really high though. It's usually around 197/98 and she's already doubled the blood pressure medication I'm on and this week started me on a Beta Blocker. Hopefully that will help. I had to buy a blood pressure cuff so I can keep track of it because she's worried it's so high.
---
Falcor is back to his old self and I'm still trying to keep him from bouncing all over the place. But at least he's feeling better.
The high this week was 68F/20C
The low this week was 38F/3C
So that's it for this week's Apartment Hell  Life! Be sure to come back next week for more.
Posted by Mary Kirkland at 12:00 AM 22 comments

Favorite Song of the Week

I heard this song last week and loved it. But the violin really cinched this song for me. This song by Imminence is the first song from this band that I've heard but I really like it. I hope you enjoy it.
Posted by Mary Kirkland at 12:00 AM 24 comments 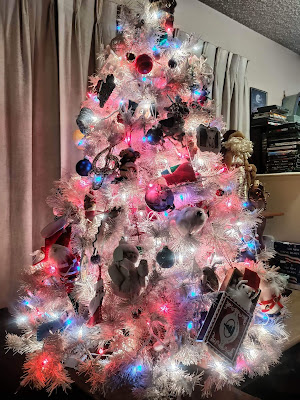 Since I didn't receive any freebies this week, I figured I would show you a picture of my Christmas tree. I put it up this week, because why not. I hope everyone had a nice Thanksgiving.
Posted by Mary Kirkland at 12:00 AM 21 comments

Favorite Picture of the Week/ Skywatch 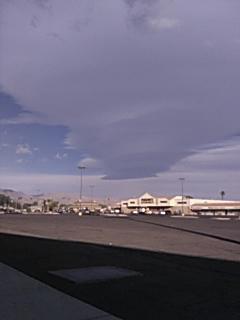 We've had some great cloud cover over the past two weeks. Here are a few of the sky pictures that I've taken in that time. 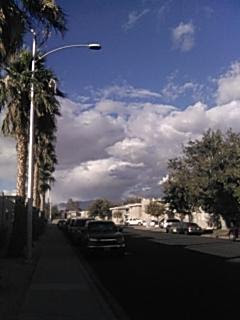 I love it when there's a bunch of clouds in the sky during the day. 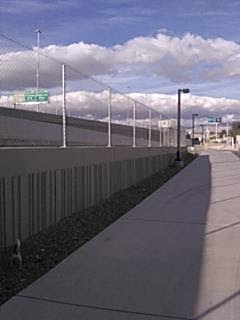 I was walking along the sound wall with Falcor one morning until the wall gets smaller and you can see the freeway. I spotted all those clouds and snapped a picture. 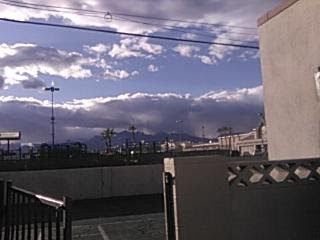 A beautiful blue sky and lots of big puffy clouds sure made the cooler days nice.
Posted by Mary Kirkland at 12:00 AM 20 comments 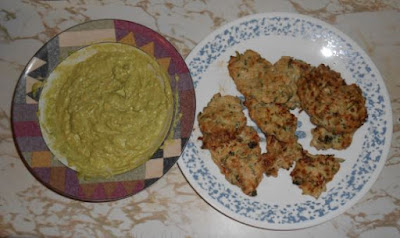 This is a repost from 2016 but I've made this many times because I love this. And it's low carb which is great.
You will need
1 lb ground chicken
3 TBSP diced Cilantro
1/4 teaspoon garlic powder
2 cups grated zucchini
2 diced green onions
1/4 tsp Chili Powder
1/4 tsp Smoked Paprika
salt and pepper to taste
olive oil 2 teaspoons
Add the shredded zucchini to a cheese cloth or clean kitchen towel and twist it to remove most of the moisture from the zucchini.
Mix together all ingredients and drop by small spoonful's and flatten out into patties, into hot olive oil on pan. Fry on each side for 5 minutes. Serve with guacamole dipping sauce.
Recipe for Guacamole
2 ripe avocados
1TBSP lemon juice
1 tsp mayonnaise
salt to taste
Peel the avocados and mash them. Add lemon juice, mayo and salt. Mix well.
I love making these ahead of time and having them as a snack or lunch.
Would you eat this?
Posted by Mary Kirkland at 12:00 AM 22 comments 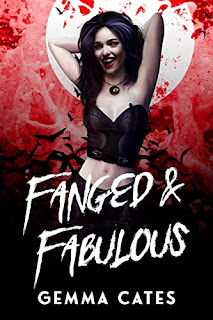 Book Description
I Wanna Suck Your...
Blood. I'm a vampire. Come on. Then I met Simon and couldn't help thinking: maybe I'm after more than a little nutrition.
He's a runner on a strict diet.
I eat chips and queso as a main course.
He's punctual.
I think five minutes late is on time.
He's an engineer.
I tell stories for a living.
He's human.
I'm not.
One misanthropic vamp (me) meets one commitment-shy human (him) and sparks fly. But humans and vamps don't do relationships...right?
Note from the author: This book contains steamy vampire-human shenanigans, enough naughty words to make someone (not me) blush, and a vampire who secretly (deep, deep, deep down) longs to be loved.
My Review
Becca doesn't like being around people. Most everyone irritates her and oh yeah, she's a vampire. But her friend talks her into coming to a party where she meets Simon. But Simon isn't looking for a relationship since he just got out of one where he wasn't treated well. But they like each other and he doesn't irritate her, so much so that she doesn't mind being around him.
They end up getting together and she tells him she's a vampire to get his permission to bite him, thinking that she can just wipe his memory of the bite afterwards but that doesn't go as planned and she doesn't know why.
They end up having a lot in common and she finds herself falling for him but she doesn't think he wants her back the way she wants him. Of course there has to be a little miscommunication in order for them to finally talk and things to work out.
I liked this. It was a quick, sweet read.
I give this book 4 out of 5 stars.
Amazon
Posted by Mary Kirkland at 12:00 AM 18 comments 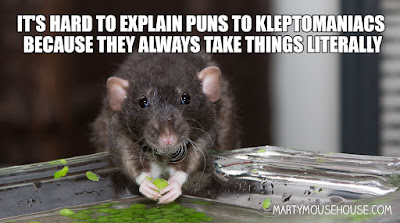 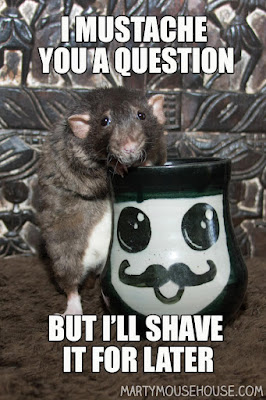 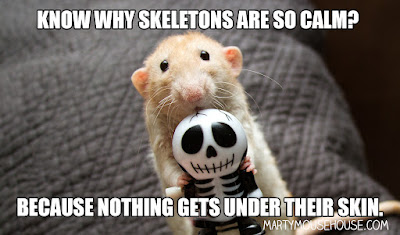 *All pictures today are courtesy of www.martymousehouse.com*
Posted by Mary Kirkland at 12:00 AM 28 comments 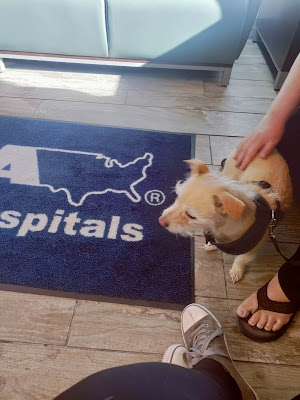 On Monday morning Falcor had hurt his back by jumping off the couch or my bed. He was in obvious pain and I didn't know if he had a broken rib or something so we took him into the Veterinarian's office right away. He's fine, he just pulled a muscle in his shoulder and back by leaping off the bed or the couch. He's 8 years old and even though he still has lot's of energy, his old bones and muscles aren't up to all that jumping and leaping he does. So they gave me some pain meds, told us to keep him calm and don't let him jump on anything for a week. We went to VCA Animal Hospital, they were so good with him. The vet even called me the next day to ask how he was doing.

The pain meds really helped and he was so much better the next morning. But I had to keep him off all the furniture all week so he wasn't doing any jumping up or down and that was a full time job.  A couple of times he jumped up on the couch and I would pick his bed up and sit it next to him, he would crawl into it and I would pick the bed up with him in it and set him on the floor. He had his own elevator service a few times. I didn't want to pick him up and hurt him so I did it like that. But he quickly learned not to jump on anything for the most part even though he was feeling better. I kept a bed in the living room during the day for him to sleep on when the pain meds kicked in and he got sleepy and then took the bed back in the bedroom for him to sleep in at night. He's used to laying on the couch or the chair and I didn't want him jumping up on anything. It was hard. Poor baby.
That's also the reason I didn't get around to leaving many comments on other blogs this week. I need to catch up on that now.
But he's much better now as you can see here. One of the dogs that run around off leash all the time came running up to him and they started playing a couple of days ago.

Update: I got a call from the vet yesterday and she told me that based on the radiology reports he had a slipped disc in his neck that was causing the pain. She said he also has IVDD, or Intervertebral Disc Disease and so I need to keep him from doing too much jumping and call her right away if he seems in pain or has trouble walking. But hopefully he'll be fine for a long time and won't have anymore pain as long as he doesn't slip a disc again. Something I'll have to watch for from now on.
Some of you might remember that I've said I have Agoraphobia and Social Anxiety. So getting in a car and going to the vets office was a bit difficult for me and my daughter actually went with me because this was only the second time I've been in a car away from my apartment complex in the past 10 years or more. But I went and got through it for Falcor. 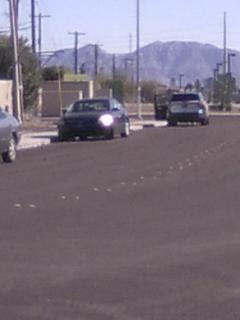 That car furthest away at the top of the picture is a cop car. The police were around my complex and across the street again this week. I saw 2 more police cars go into the alley behind the apartment complex directly across from me and this police car was out by the street. They were there for a long time. I also saw a police car parked in front of my building that night but because it was night time I didn't get a picture with my phone.
---
On Wednesday night drug dealer started making weird remarks to my daughter about how they should get a room together, they should go out ect. This man is 50 years old and my daughter is 31. Later that night he had the balls to come to my door and ask her if she wanted him to tuck her in.
So the next morning I saw him outside and this was the conversation.
Me: Hey, do me a favor and stay away from my daughter.
Drug Dealer: Your daughter? What did I do to your daughter?
Me: She's not interested.
Drug Dealer; Interested in what?
Me: She's not interested in you. You're too old. You're old enough to be her father.
Drug Dealer: *Stares blankly at me because he's high as hell* I don't know...
Me: Look, I know what went on last night. Stay the #uck away from my daughter and my door!
Then I turned around and walked away and he stumbled back to his door.
I'm not gonna put up with this nasty old man making snide comments to my kid. I still have no idea if he's actually getting evicted or not.
The high this week was 64F/17C
The low this week was 36F/2C
So that's it for this week's Apartment Hell  Life! Be sure to come back next week for more.
Posted by Mary Kirkland at 12:00 AM 44 comments

Favorite Song of the Week

I've been a fan of Coheed and Cambria for many years. The lead singer has a unique voice but I had to share this song since I love it so much. I hope you like it too.
Posted by Mary Kirkland at 12:00 AM 16 comments