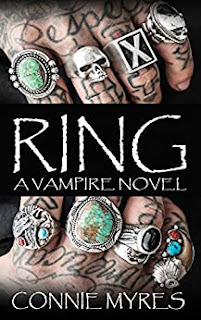 Book Description
Bloodthirsty vampires, obedient gargoyles, and a creepy castle on the shore of Lake Michigan, just might give Cassie the alternative future that she thought she wanted.
Cassie co-owns C & N Rare Books with her best friend Nicole in Black Water, Michigan. Desperately wanting to be a wife and mother, she decides her longtime boyfriend Derrick is the man she should marry, even though he wasn’t everything that she thought she wanted in a husband. Then an intriguing man enters the shop and Cassie reconsiders her options. Maybe Gustave was the right man for her—fate stepped in just in time.
Will bookstore owner Cassie Fields marry her longtime love and have children before her biological clock runs out, or will the mysterious man and the found ring drive her to madness, causing her to lose everything she's ever wanted?
Vampires, obsession, and a series of haunting events plague Cassie and influence her life decisions. Can she break the hypnotizing pull of the mysterious stranger, Gustave Veil?
My Review
Cassie owns a bookstore which I loved. That has to be my favorite job for someone in a book I'm reading. She thinks her long time boyfriend, Derrick is going to ask her to marry him and she's excited until a mysterious man walks into her bookstore asking for a particular book she has to find for him. When he leaves the ring behind that she has been looking at, she decides to get the book and take both the book and the ring back to him herself. But she makes the mistake of putting the ring on her finger after she forgets to put it in the safe and finds it in her pocket.
Gustave seems like one of those mysterious, rich guys that end up being sweet vampires in the vampire romances that I read. But he's been watching Cassie unbeknownst to her and putting the ring on her finger just put her in danger.
Gustave is not the romantic vampire type that I am used to reading. No, he's more the old Dracula type vampire who is ruthless, bloodthirsty and used to getting his way by any means necessary. We get a past look at how he's treated people to get what he wants and he's not a nice guy. The people who are with him are not nice either so when Cassie is able to fight the hypnotic pull somehow, he's not happy.
I love Cassie's friends and the fact that Derrick comes to fight for her. The story was good and I really liked all the other characters and monsters. There are gargoyles that are just as bloodthirsty as Gustave is and it made for an interesting story. The ending was really good and exactly what I needed to make this a fun story.
I give this book 5 out of 5 stars.
Amazon
Posted by Mary Kirkland at 12:00 AM 19 comments