Review: When Darkness Falls by May Sage 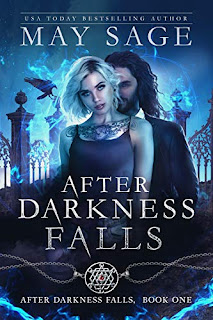 They’ve exterminated an entire bloodline, purging the world of the only creatures vampires dread. Or so they think.

Chloe used to study hard, do everything right to pave a bright future, but children sometimes have to pay for their parents’ sins, and Chloe’s tab is pretty steep.
At twenty-six, when a series of attacks forces her to seek refuge in the notorious Institute of Paranormal Studies, Chloe sees it as a second chance to achieve her goals. She believes she has nothing to lose.
She couldn’t be more mistaken.

Levi has had centuries to observe the mortals and immortals of this world. He knows what the sassy woman who entered his domain is at first glance. A relic of the old days, so ancient that even an elder lord descended from the first immortals has reason to fear her.
He should slit her throat while he has the chance.
He should.

After Darkness Falls is a series of standalone paranormal romance novels.

Chloe finds herself In a Shifter bar and her boss helps her out and gets her into a school for paranormal studies after she's attacked. She's on the run from people who want her dead because her father is a bad person so the safest place for her is at the school. On her way to the school she meets the owner of the land that the schools is on. He's a very interesting guy and she immediately likes and dislikes him at the same time. She finds herself drawn to him and finds out that he's a very powerful person at school. People don't talk about him because they're scared of him, they call him the leviathan but she knows him as Levi.

She finds herself having fun with the school even though bad people are after her even though she doesn't realize how much danger she's in and she feels betrayed because nobody told her what was really going on. She make some friends at the school and she finds she's not as regular or human as she thought she was because there there's something different about her but it isn't until the end of the book that we figure out what it is and it was a really good twist. I really like the end of this book I love Levi, he was such a good character and Chloe was great. I'm looking forward to reading more of this series now.