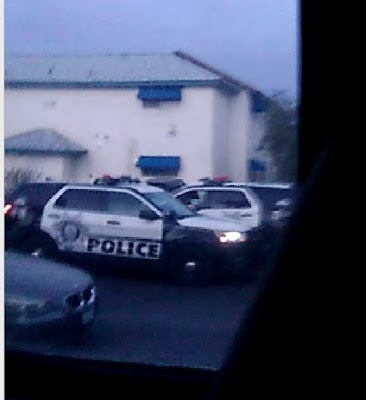 I happened to be in my bedroom on Tuesday when I spotted 2 police cars sitting in the street talking to each other. They didn't stop and get out but I have been seeing a lot of police cars patrolling around here a lot lately. Maybe it will cut down on crimes around here but maybe not.
---- 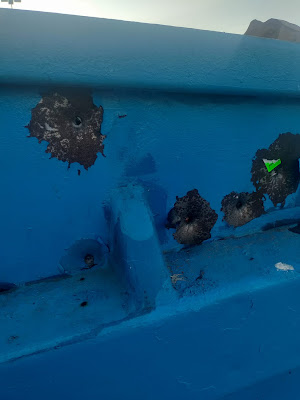 I noticed that there were gunshots in one of the garbage cans in our alley. I don't know if this is from the last gunshots that happened around here or one of the other times I heard gunshots. But those are definitely bullet holes.
---
My daughter catches the bus very near our apartment complex. On Thursday while she was sitting at the bus stop she noticed a woman crawling on the sidewalk and into the grass across the street from her. She took a little video. It was pretty apparent that the woman was on drugs. My daughter said she was yelling and crawling around for a while.
---
This is also my 300th Apartment Life post. I'm actually surprised that so much stuff goes on around here for me to post about each week.
The high this week was 84F/28C
The low this week was 39F/3C
So that's it for this week's Apartment Hell  Life! Be sure to come back next week for more.
Posted by Mary Kirkland at 12:00 AM 58 comments