Review: On The Prowl by Patricia Briggs, Eileen Wilks, Karen Chance, and Sunny 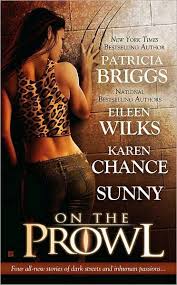 These all-new paranormal romances from today's hottest authors feature a female werewolf who comes into her own; a Lord who crosses paths with a fiery mage; a mixed-blood Child of the Moon who faces an uncertain future; and a woman whose sixth sense proves to be a dangerous talent.

"Alpha and Omega" by Patricia Briggs, was probably the best story out of the 4 short stories included in this anthology. I would have loved this story a lot more if it hadn't ended without all the loose ends being tied up and with the words....

"Look for the continuation of Charles and Anna's story in August 2008 from Ace Books."

Yeah, that was a complete let down down for me. Anthologies should include complete stories with a beginning, middle and ending that ties up all the loose ends of the story. Just because it's an anthology doesn't mean that I don't expect a complete story. I almost chucked the book right in the garbage at that point but decided to read the other three stories.

Anyway, this story is about Anna who was turned into a werewolf 3 years ago and her pack is totally wrong on so many levels. She sees something she shouldn't have and doesn't know what else to do so she calls a werewolf that is supposed to take care of problems in the packs. He sends his son, who is an enforcer and kills members of the pack if his father sends him to do so. Anna and Charles get to know one another and they kindle a relationship that we don't really get to see where it goes because although the larger story line is wrapped up their relationship story line is just beginning and I guess continues into the next book.

"Inhuman" by Eileen Wilks was a story that caught me by surprise because it had a few twists in it and I love twists. Kai has a strange telepathic type gift and since someone is killing people with 'gifts', her friend Nathan who is a cop, decides to help her hide. But Nathan has secrets of his own and when they come to light and he calls a couple of friends to help, it all starts to make more sense. I really can't say much about this one or all the different twists and plot lines would be given away. It's enough to say that this was a really good story.

"Buying Trouble" by Karen Chance was a little surprising for me because I don't usually like fae, fairy, or elf type stories. But this one was written very well and had a really interesting story line. Claire was being put up on the auction block by a family member and Heidar who is an elf there to bid on an item or two. During a riot that breaks out, they are both transported somewhere else and have to stay under the radar if they are to stay alive. While on the run, Clair finds out a lot about herself, things she had no idea about and finds people she never knew existed. That was a fun story.

"Mona Lisa Betwining" by Sunny just didn't catch my attention at all. It seemed like this story was from the middle of a series and I was just completely lost in their world somewhere trying to figure out what was going on and never really making much sense of things. There was a lot of sex and it wasn't romantic much at all. The queen is Mona Lisa and she killed the old queen. The story line was confusing and felt erratic and rushed. I don't mind sex in a romance story but there has to be some sort of intriguing story line to go along with it for it to be a good story and this just didn't have that.

I'm glad that I won this book in a blog contest because I'd be mad if I had paid money for it. If you'd like to read this for yourself, you can find it here.