Review: Season of the Wolf by Maria Vale 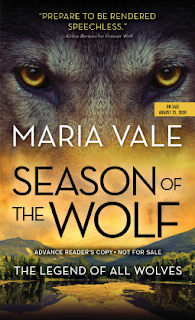 Book Description
In a world of danger and uncertainty, the Alpha has enough to worry about without him...
For Alpha Evie Kitwanasdottir, things are never easy. The Great North Pack has just survived a deadly attack. Evie is determined to do whatever is necessary to keep her Pack safe, especially from the four Shifters who are their prisoners.
Constantine lost his parents and his humanity on the same devastating day. He has been a thoughtless killer ever since. When Constantine is moved to live under Evie's watchful eye, he discovers that taking directions and having a purpose are not the same thing.
Each moment spent together brings new revelations to Constantine, who begins to understand the loneliness of being Alpha. He finds strength and direction in helping Evie, but there is no room for a small love in the Pack, so Constantine must work harder than ever to prove to Evie he is capable of a love big enough for the Great North Pack itself.
My Review
Constantine and three other shifters find themselves under the watchful eye of Evie and her pack. Constantine especially doesn't know what to think about his situation right from the very beginning and there are some of the pack that really don't want them there.
Evie is the pack alpha and she already had her hands full before Constantine and the other shifters showed up. But now she has a whole other set of problems because the more time she spends with Constantine, the more she likes him.
This was not exactly what I was expecting because Evie and her pack are more animal than human. They think like animals and act like animals and she really doesn't understand Constantine even though he's a shifter. But I liked how different it was, how primal they were and how Evie acted around Constantine. At first she didn't even want others knowing that they were being intimate but with a good sense of smell, I guess it was hard to really keep that a secret. So when one male takes offense that their alpha is spending time with and might even think about having pups with this outsider, things go very wrong. It causes a lot of problems and I was liking how things were going but then it ended without a real ending...a cliffhanger and I really didn't care for that ending. I really wanted more.
I give this book 3 out of 5 stars.
Disclosure: I was given an ARC of this book via NetGalley but all thoughts and opinions are my own.
Posted by Mary Kirkland at 12:00 AM 30 comments