Review: Pleasure Me by Monica Burns 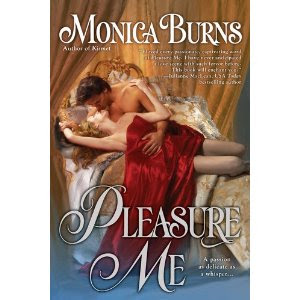 Lady Ruth Attwood is a forty one year old courtesean who's younger lover just left her for a much younger woman. The fact that she was abandonded for someone younger seriously dents her feelings about her age. But her friends talk her into going to a ball where she meets young Garrick Stratfield.

Garrick is 12 years younger than Ruth and she thinks he is just being nice when he intervenes on her behalf at the ball, but she finds out different when she finds herself up against him for the purchase of a house they both want. Neither one knows they both want the large house for orphanages they both need to expand.

The more Garrick is around Lady Ruth the more he likes her and wants to be with her but he has a closely guarded secret, Garrick is a 29 year old virgin. When Garrick was younger his ruthless uncle found out about a physical birth defect Garrick had and mercessly teased and taunted him about it, now Garrick believes no woman will ever want him in her bed.

Lady Ruth is so reluctant to enter into a relationship with Garrick because of their age difference, she feels she is too old. But Garrick can barely keep his hands off of Ruth even though he is reluctant to complete the act of love making...that is until Lady Ruth gives him a way to come to her bed where he has no worry she will see what he is ashamed of.