This is a new weekly blog post that I'm calling Apartment Hell  Life. I've mentioned a few times some of the crazy things that go on in and around my apartment complex in the past 22 years that we've lived here and people keep telling me I should write a book. But instead of a book, I've decided to share the crazy things that have happened in and around my apartment complex in the last 23 years here in a weekly blog post.
I forgot to tell you last week that the liquor store next door to me is open again and the owner is out of jail. I don't know if he made bail or what but he's back in business. lol
---- 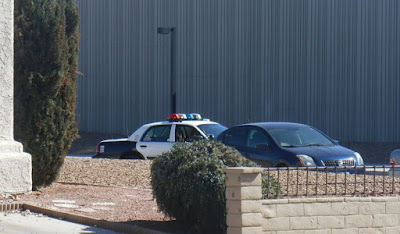 I was out with Falcor at 7am on Tuesday and watched as a police car pulled out of the alley for the apartment complex across the street and then watched as this police car disappeared down the street. I figured they were just patrolling after last week. But I was wrong. 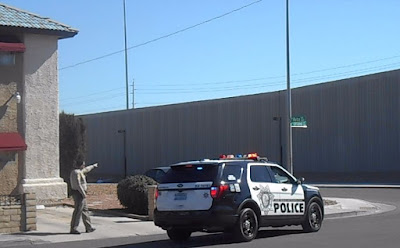 A few minutes later I saw this police officer walk from the alley to the front of the building and as police cars were driving up the street he was pointing around the corner where the alley is and they started driving in there. In all I watched 3 police cars go to the alley and park. I don't know what they were doing or if it had anything to do with last week but they were there for about an hour. 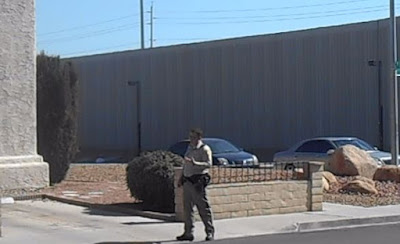 All the while this officer stood out front directing police cars to the alley when they came and talking on his phone. I didn't see any of the police in the courtyard across the street or going into the apartments over there so they must have stayed in the alley. Maybe they were searching someone's car. I don't know. 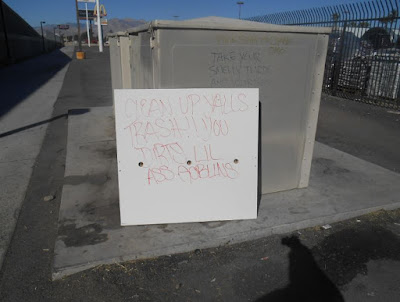 While I was walking Falcor I spotted this sign where the people sit and do their drugs. I think these boxes are transformers or electrical boxes. To the left of the picture is the path that I walk Falcor on next to the sound wall. 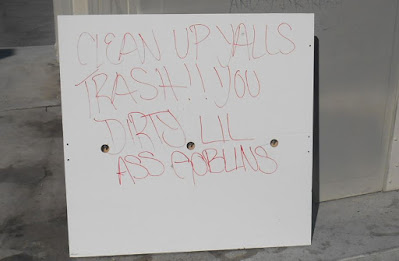 I enlarged the sign so you can see it better. It says, "Clean up yalls trash!! You dirty lil ass goblins."
I probably laughed way too hard at this.
So that's it for this week's Apartment Hell  Life! Be sure to come back next week for more.
Posted by Mary Kirkland at 12:00 AM 57 comments