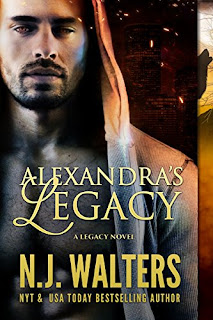 Alexandra Riley’s predictable world is turned upside down when she discovers she’s the half-breed daughter of a legendary alpha werewolf—a sought-after prize to some, an abomination to others. The tall, dark stranger who bursts into her father’s garage shatters any illusion that she can continue with her normal life.

From the second Joshua Striker, enforcer for the Wolf Creek pack, sees Alex, she becomes a distraction he can’t afford. He’s come to the city to bring Alex to the safety of the pack. That’s it. But who is going to keep her safe from him? Because the wolf inside him is demanding he claim her—now.

From city streets to the mountains of North Carolina, the pair must evade bounty hunters out to kill any werewolf they can, wolves who want to claim Alex, and purists bent on eradicating half breeds. And with all this going on, Alex still has learn what it means to be a wolf and deal with the overbearing male determined to keep her safe.

Each book in the Legacy series is a standalone story that can be enjoyed out of order.

Alexandra (Alex) thinks she's just a normal girl until her father tells her he has something important to tell her and her world is blown to bits.

Joshua comes to Alex and her father to make sure that she safely makes it back to their pack so she can pick a mate from the eligible males there.

James (Alex's father) had been the leader of his pack many years ago but when his mate died in childbirth, he took it really bad and left. Years later he met a human woman and had Alex with her. James in a wolf shifter and had hoped that his daughter would be more human than wolf but he's known for a while that she was about to go into heat and the male wolves would be coming after her to claim her. But before he can tell his daughter what's going on, the wolves come busting into his home and Joshua shows up to keep her safe.

Alex and Joshua try making their way back to his pack's home but with rogue wolves and hunter's on their backs every step of the way, it's no easy task. I thought Alex took things really well, a little too well in my opinion. I was glad that she wasn't a hide in the corner while the men do all the work type of girl but I expected her to not just take everything in and be alright with it all like she was.

I really don't like the world that the females have in this pack society because as soon as a female goes into heat, the unmated males come to fight for her and she has no choice but to go with the winner. Uhm, what? Thankfully she ends up with the male she wanted but I don't like that males either didn't like that she was a half breed and wanted to kill her or were ready to fight each other in order to claim her and she had no choice. It's a little barbaric and with her being half human I am hoping that she brings a little new kind of influence into their society. Her father has lived around the humans long enough to pick up some new habits and I hope he brings something new to the pack now that he's back.

There was a lot of action, a lot of fighting, and I felt bad for Alex because she went through a lot, too much in my opinion. The fact that she hardly broke down after everything she went through in order to get to safety was a little unbelievable but I really liked her for it. I am hoping that their society comes out of the middle ages with their beliefs at least a little, as time goes on. But either way I liked the overall story and plan on reading more of this series.