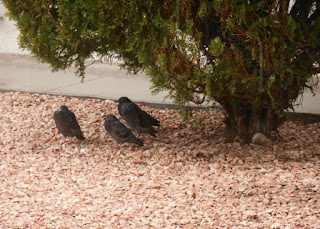 So 5 days ago it was 89 degrees. But it started cooling down, so this past Saturday it started sprinkling rain just a little mid morning. I saw these three pigeons had been out in the rain but soon took shelter under this bush to dry off. 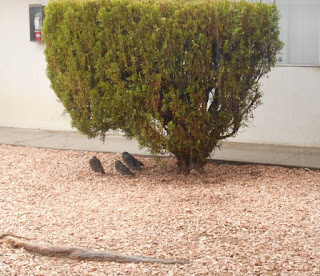 I thought it was cute and so I took a picture of them. The ground was barely wet, I had no idea what was coming. 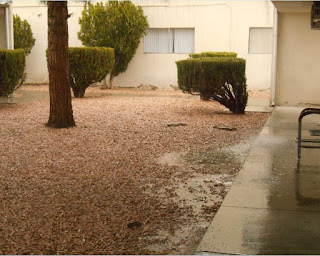 About 30 minutes later it started raining. Regular rain not like a down pour or anything. You can see the rain as it poured off the roof and onto the sidewalk next to my apartment. 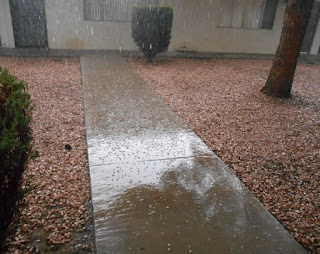 Then Boom! It started coming down really hard all of the sudden and as I was standing there taking pictures, it started hailing pea size hail. We hardly ever get hail. We get flash flooding usually starting in June but we don't get a lot of hail. 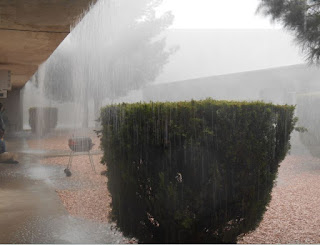 Then it started raining even harder and even more hail came down. Ken was at our bedroom window because it was getting pounded and he thought it was going to break. Thankfully it didn't. 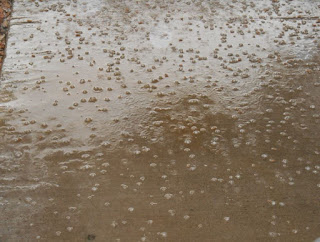 Usually when it does hail, it's so small that it melts as soon as it hits the ground. Not this time. 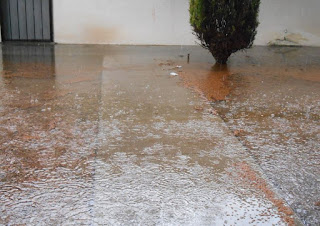 Within 30 minutes my entire courtyard was flooded. And the water was up over the sidewalk on the other side of the courtyard, right up to the doors. 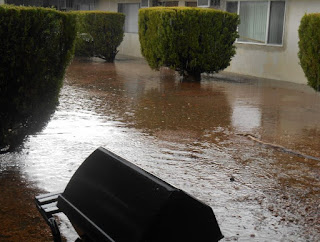 All of the rocks from that first picture that I took of the pigeons are all under water now. And the water started to come up over the sidewalk in parts of it. The pigeons took up residence in one of the Pine tree's until the rain stopped. 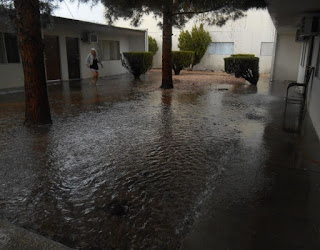 One of my neighbors saw her friend standing over by my door and walked across the flooded rocks to help him get his bags and bring them inside. She had gone to the store and locked the door and he didn't have a key so he was waiting outside where it was driest over by my door. 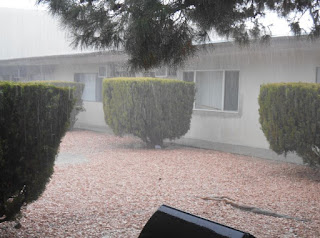 Thankfully by the next day most of the water covering the ground had soaked in and it was flooded as much even though it was still raining off and on that day too.

I've lived here for 19 years and this courtyard has never gotten that flooded before. Oh and people are crazy. As all that rain is coming down and it was hailing, every body and their uncle was coming out of their apartments to 'feel the pain' of hail hitting their body. While others just took a seat on the soaked sidewalk to watch the rain. 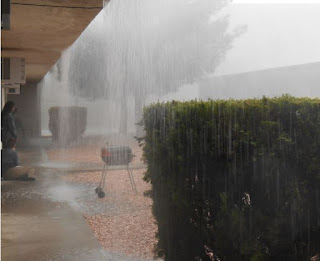 One person sits on the wet sidewalk while another stands. They stayed there for about an hour. lol I just don't understand people at times.