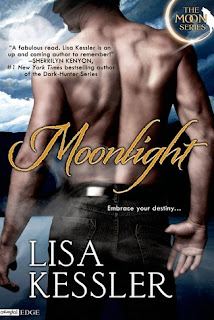 Rancher Adam Sloan is more than meets the eye. As the heir to his Pack, the sexy werewolf's biggest challenge is keeping his kin's true nature under wraps. But a group of jaguar shifters threatens to reveal the pack, blasting into town killing humans in plain sight. And when he smells one at the local diner, his standing orders are to take her out.

Lana Turpin doesn't realize she's a moving target. Raised in the foster system, she only knows that she blacks out during the new moon and wakes up without remembering a thing. But now she's being tracked by some strange organization that wants her back--even though she's never stepped foot inside their compound. And the stranger across the diner is watching her like an enemy.

It should be a simple mission for Adam, but when he touches the frustratingly beautiful Lana, his inner wolf howls...mate. Now, the two must find and stop the people who hunt her...and Adam must keep his own family from killing the only woman he will ever love.

Lana is on the run and only stopped in the diner to get a quick bite. She thinks that the psych ward sent armed goons after her to bring her back because she can't remember what happens when she blacks out once a month.

In walks Adam and he gives Lana the most sexy smile he can muster when he see's her in the diner. But she flatly dismisses him until he saves her from armed goons trying to take her away. Then they're both on the run from a shady organization.

Right away Adam realizes he's found his mate and after his dad starts on him about becoming the alpha, settling down and having babies...he can hardly tell his dad and pack that he's found his mate, because she's not a wolf. Adam is afraid to even bring her close to his family for fear they'll hurt or kill her and ask questions later.

Sometimes the secondary characters really make their mark in a book and Sebastian was one such character. He starts out an evil, bad guy that everyone wants to kill. But his story changes somewhat part way through the book and I was happy to see things take an unexpected turn. The twists in this book are many, one of the best comes right at the end of the book. I really liked that a lot.

There's plenty of action, fights and romance to keep you from putting this one down after you start it.