Review: Sealed With A Curse by Cecy Robson 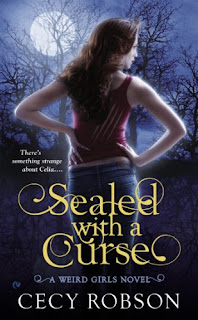 Celia Wird and her three sisters are just like other twenty-something girls—with one tiny exception: They're the products of a curse that backfired and gave each of them unique powers that make them, well, a little weird…

The Wird sisters are content to avoid the local vampires, werebeasts, and witches of the Lake Tahoe region—until one of them blows up a vampire in self-defense. Everyone knows vampires aren't aggressive, and killing one is punishable by death. But soon more bloodlust-fueled attacks occur, and the community wonders if the vampires of Tahoe are plague-ridden.

Celia reluctantly agrees to help Misha, the handsome leader of an infected vampire family. But Aric, the head of the werewolf pack determined to destroy Misha's family to keep the area safe, warns Celia to stay out of the fight. Caught between two hot alphas, Celia must find a way to please everyone, save everyone, and—oh, yeah—not lose her heart to the wrong guy or die a miserable death. Because now that the evil behind the plague knows who Celia is, he's coming for her and her sisters.

This Wird girl has never had it so tough.

Celia and her three sisters all have supernatural powers but they have been trying to stay out of the supernatural world and they do a good job of it until they kill a vampire who was attacking one of their sisters. They figure it was self defense but they are called to vampire court to answer for what they did. After they're found to have done nothing wrong, the master vampire, Misha enlists their help to stop the vampires who have been infected with bloodlust and the person responsible for the bloodlust. Celia finds herself being pursued by not only Misha but also the leader of the werewolf pack, Aric.

These sisters all have unique gifts, Celia can shift into a tigress but if she's touched by another animal she will shift into that animal as well. Part of that was hilarious because it happens to her a couple of times and it was too funny. One of the other sisters can heal others which was good since Celia cannot heal herself even though she's a shifter. There was a lot of action in this book. The vampires who are infected with bloodlust are lethal, scary and crazy. They have to be killed in order to stop them so there are several action packed fight scenes.

There's some backstabbing, and a good twist that I didn't see coming towards the end. I loved this because not only do we have vampires who are not soft and cuddly, they are dark, formidable and scary. But we also have werewolves who are sexy, fun, fierce and protective. I love both vampires and werewolf shifters so this was a great surprise to find in the book. I had a great time with this one. I'll definitely be looking for the next books in this series.