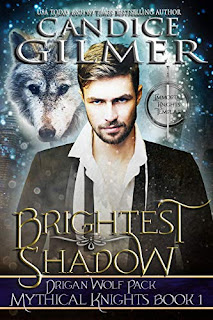 Losing a father is always hard, losing a father who’s a pillar of the community is harder. When he’s the alpha of your werewolf pack it is even harder.

Still, that’s exactly where David Drigan finds himself--lost and rudderless after the death of his father.

Nonetheless, the final transformation to turn David into the leader has yet to happen, leaving his family wondering if he will ever be strong enough to lead his pack.

Trying to step into his place in society, David meets Kelsey.

There’s just something about her that makes David’s beastly desires surface unlike ever before. The need to take her and protect her, if only from herself, overwhelms him.

Not that Kelsey would let him. She doesn’t need anyone to take care of her. Never has.

But this David guy? He's not her usual bad boy.

Then things get crazier.

One night at her favorite decrepit amusement park, she learns there’s a lot more to David—and the world—than she ever expected.

Is Kelsey ready for this darker world where she would have to step up and truly stand by her alpha?

David just lost his father, the alpha of their pack and now they were all looking to him to be the alpha but the change that was supposed to happen to him to make him alpha...just wan't happening and he had no idea why. David and Kelsey met at a party on his behalf even though she didn't know who he was when they met. The attraction they felt for one another was almost instantaneous but they both had roles to play at the party so they didn't get a chance to really talk much.

They meet again when he comes to her work to sign some papers and they make a date to go running later on. They get along really well and like being around each other which was fun to watch. Kelsey has no idea that he's a werewolf even though he's let a few things slip but she never picked up on it.

Then when they're at one of her favorite places to spend time, some bad mythicals as they call themselves, show up and put David and Kelsey in danger. David has no choice but to shift into his wolf in order to keep them both safe from the bad guys, but it's a shock. She takes the whole thing pretty well at first and then just wants some space. I don't think she really knew how to deal with all of it but I can't really blame her.

There's a couple of interesting characters in this book and even though they seem like they are almost bad guys, I think there might be more to them than that. It'll be interesting to get to see more of them in future books. But I really think an opportunity was lost when we didn't get to see more of David's mother's grief over having just lost her mate. I realize this isn't her story but the expected grief just wan't there which made her character a little less believable.

I really enjoyed this author's writing style. I felt drawn into the story from the very first pages. I never got bored and always felt like the story was progressing nicely. We don't get a whole lot of world building so I hope to get more of the mythicals and how they came about in the next books.