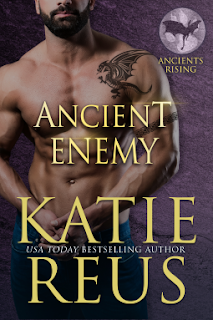 Book Description
She should be his mortal enemy.
Ancient dragon shifter Rhys awoke from his slumber hungry for revenge against the witch who killed his sister. When his hunt takes him to the rebuilding city of New Orleans, he finds a woman he can’t keep his eyes off—but she’s a witch. While Rhys wants to despise all of Dallas’s kind, even he can’t deny that she's beautiful, kind and…adorable. And her pet baby dragon only increases his fascination with the sexy woman. Protective instincts he never knew he had take over him as they hunt powerful monsters. He’s forced to confront everything he thought he knew about witches as his life is turned upside down.
But he wants her anyway.
Dallas Kinley is used to being hated because of what she is. Witches have always been the pariahs of the supernatural community. Until now, when the world needs rebuilding. Even though she wants to keep her distance from Rhys, vampires and humans are dying in New Orleans, so she vows to help him hunt down those responsible. But finding the enemy comes at a heavy price, because Dallas is hiding a terrible secret. As they race against the clock to find the murderers, she can only hope his need for revenge won’t rip them apart. Especially when he finds out what she’s been hiding from him.
My Review
Ever since The Fall when a bunch of evil dragon shifters tried to take over and ended up killing and destroying a lot of people and property, the supernatural territories had taken over and human governments weren't really a thing anymore. Humans knew about supernaturals and now the good guys were trying to make things better and make up for the destruction their people had caused and were taking out the dragons that had caused all the problems to begin with.
Rhys had been asleep for a long time but when he woke, he wanted to get revenge on the witch that had killed his sister. But he comes across Dallas and can't help but feel a connection to her even though she's a witch and he should hate her. The fact that she has a pet baby dragon just intrigues him more. Willow the baby dragon is the cutest thing ever and I absolutely loved how she was a huge part of this story.
The King asks Dallas to go to different places in the city and see if she can start food gardens with her magic. After the city was practically destroyed he doesn't want there to be a food shortage while he's trying to rebuild the city. The King also sends Rhys to be her bodyguard while she is scouting the different areas. But Rhys is there because he can feel that Catta the witch that killed his sister is near and he wants Dallas's help tracking her down.
They get a big break when they come across a house that Dallas knows has something awful inside it hidden by witchcraft. She is hoping to rescue the kidnapped people but when she uses too much power to get in the house, Rhys protective instincts kick in when she passes out from exhaustion. I knew that these two would end up together when he went a little crazy seeing her so vulnerable.
Dallas and Rhys were so sexy together and make such a great couple. She's a witch and he's a dragon shifter which makes for some really fun times together. But Dallas has a huge secret and I didn't know if it was going to blow up in her face once Rhys found out about it. I really loved the ending to this book, it made me smile. I'm loving this series so far so I'll definitely be reading the next book.
I give this book 5 out of 5 stars.
Disclosure: I was given an ARC of this book via NetGalley but all thoughts and opinions are my own.
Posted by Mary Kirkland at 8:00 AM 29 comments