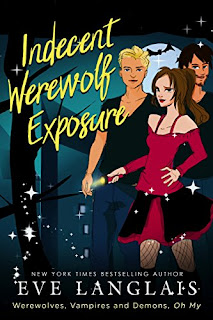 It’s TGIF, which means in a few hours I’ll be tossing back a few martinis with my best friend, Brenda. First, though, I need to deal with my crazy new client, a werewolf who thinks it’s okay to pee on his neighbor’s flowers because she’s a witch. What a shame he’s obviously got a few screws loose because bad boy Pete is seriously HOT.

His insanity must be contagious because I did the craziest thing later that night. I let my nemesis in the courtroom, assistant DA Anthony Vanderson, seduce me. In my defense, he’s got mesmerizing blue eyes–and a seriously sexy bod. Still, a woman should have some standards.

With my sexual itch scratched, I should be able to go back to my awesome life as a single gal.

I guess a girl can’t always get what she wants–but boy, do my two suitors know how to give me what I need.

Warning: This story has received a new look and title. Formerly known as Two's a Couple, Three's the Law. This story contains adult subject matter, menage situations and language that is not suitable for all audiences. Reader discretion is advised.

I love this author because her writing style is great. I love how I'm pulled in from page 1 and I'm kept entertained throughout her books. Most of her books make me laugh and this was no different. These characters are funny and the fact that a werewolf finds himself in need of legal help because he urinates on his neighbors flowers just made me laugh. That completely sounded like something a werewolf would do. So that's where Pete (the werewolf) runs into Chloe but once the legal advice is given that's not the end of these two because Pete likes Chloe and even asks her out but is turned down.

Anthony is the assistant DA and runs into Chloe at a bar. They find themselves attracted to one another and end up at her place. When she wakes up alone, she figures that's the end of it but boy is she wrong. Soon Anthony and Pete are both pursuing her and she's dating both of them. How did she get so lucky? Both of these guys are tall, muscular and better than average in bed (wolf whistles).

Anthony has a secret but I kinda saw it coming. There are clues given about his secret so it's not a big twist but did make for a fun storyline. Pete finds himself in legal trouble again so it's a good thing she is so smart and can help him with this mess he finds himself in. But this also adds a bad guy to the mix that made the second half of this book really interesting. The paranormals have come out of hiding in this world and humans know about most of them but there are still some that prefer to stay a myth or hidden. I really liked this aspect of the book and thought it had a good ending.

This was a fun book and had me smiling several times.