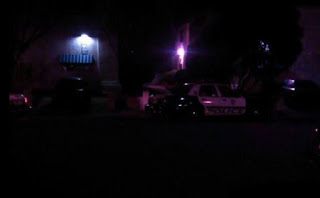 So it's official, my camera takes shitty pictures at night. But if you click on the pictures you should be able to make out the police cars in these two pictures.

So a couple of weeks ago the police showed up at 10pm. Ken is always looking out the bedroom window to see if anything is going on, on our street and so many times there is. At least this time it was for the apartment complex across the street and not my complex. 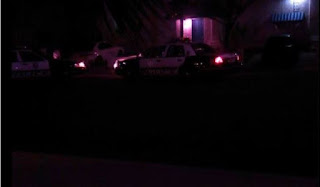 Turns out that two people got into a fight and the female started throwing furniture outside in the courtyard. Then she started throwing her boyfriends clothes and electronics outside and when she broke something (I don't know what) he got really mad and broke out the two living room windows. Someone called the police, no one was taken to jail but we saw the male get into a car when someone came to pick him up and he took several large trash bags filled with his belongings with him.

We found all this out because the neighbors love to talk and two of them came across the street where we were standing and told us what they saw.