This week the 2 guys with their shirts off near the back of the car got into a fight. They threw a couple of punches and it was over before it began. The guy that's crouched down has been in and out of jail a lot. So after it was over, he ran down the street to hide in case the cops were called. 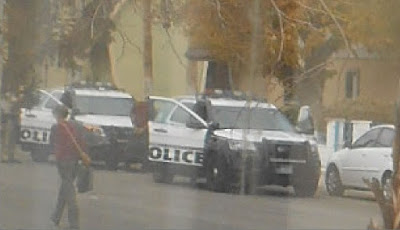 A few minutes later the police showed up and his mother told them where he was.

So they went to that apartment and arrested him. His mom said he had a warrant and they arrested him for that and the fighting since he was the one who started it.

So that's it for this week's Apartment Hell  Life! Be sure to come back next week for more.
Posted by Mary Kirkland at 12:00 AM 39 comments