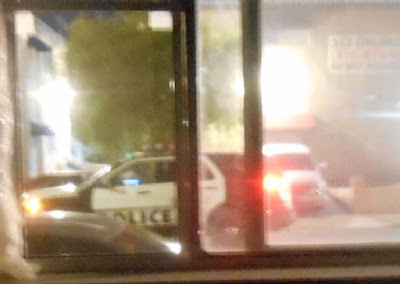 Wednesday night I was woken up from the flashing lights from this police car right across the street from my bedroom window. It was 2am and he did shut his flashing lights off after a minute but I was already awake by that time. So I got a blurry picture of the police car. All the bright lights from the freeway do help with taking pictures at night but they still come out blurry but at least you can see it's a police car.
I watched the police going into one of the downstairs apartments across the street and were talking to people over there. 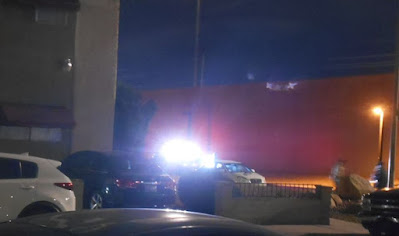 And then 2 more police cars showed up and an ambulance (I didn't get a picture of that) drove behind the building into the alley. The bright lights in this picture are of another police car that had their flashing lights on and they were blocking off the street with their headlights pointed towards me so it was really bright.
I saw someone be taken out of that courtyard across the street on a stretcher and taken to the hospital in the ambulance. No idea what happened but the police were there for over an hour when I decided to go back to bed. I have no idea when they left.
The high this week was 81F/27C
The low this week was 52F/11C
So that's it for this week's Apartment Hell  Life! Be sure to come back next week for more.
Posted by Mary Kirkland at 12:00 AM 56 comments