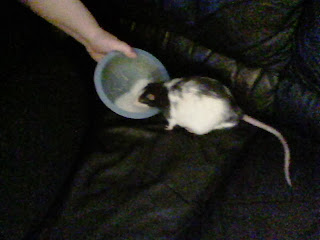 Because Lucky only had 3 legs I am more careful with him and how I let him jump around when he is out for play time. I don't want him to land too hard on his 1 front paw and sprain it. 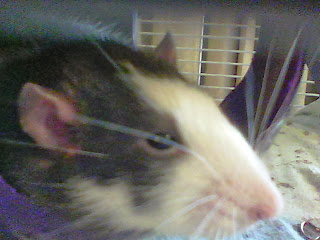 Because rats have such small bones in their bodies and limbs, sprains do happen if they fall out of your hands from a tall height and land in such a way that it hurts their legs. If your rat starts limping after a fall or jump it's a good bet that he has either sprained his leg, hurt his paw or has a break in a bone. For most sprains there's not much you can do other than make sure they don't do any jumping or climbing for a while. So taking out all ledges, ropes, ladders and any other things you have in their cage that could get them high enough that they'd have to jump down from, is a good idea. You can also give them children's motrin for the pain but if this is your first time administering this medication, it's wise to get a veterinarian to give you dosages for your rat. 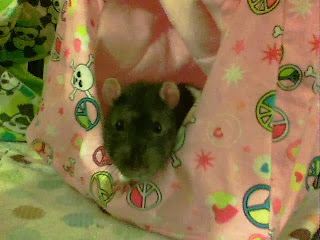 If however your rat has broken their leg and your vet thinks they can fix it. They can try a cast or they can amputate the leg. Because their bones are so small it's harder for a vet to set their limbs and put a cast on it so that the bones won't move. I have a 3 legged rat who was born that way and he does fine, running, jumping and it doesn't slow him down at all.

The best thing you can do to make sure a break or sprain doesn't happen is to always make sure you are holding your rat securely when you have them in your hands so they don't jump down on the floor while you are holding them. If you are standing up when they jump, that is a very high landing for such a small animal and it will surely at the very least sprain or bruise a leg. Younger rats are more agile and can handle having ropes, sticks and ladders in their cage but as rats get older and cannot keep their balance as well, those things should come out of their cage so they don't get hurt.