This is a new weekly blog post that I'm calling Apartment Hell  Life. I've mentioned a few times some of the crazy things that go on in and around my apartment complex in the past 22 years that we've lived here and people keep telling me I should write a book. But instead of a book, I've decided to share the crazy things that have happened in and around my apartment complex in the last 23 years here in a weekly blog post.
---
The police were in my courtyard at 10pm on Monday but I didn't get a picture of it. They had their flashlights out and were going up to a few apartments that had their doors open and were asking if we heard anyone fighting or yelling. I had my door open all day and didn't her any yelling. After a few minutes they left.
--- 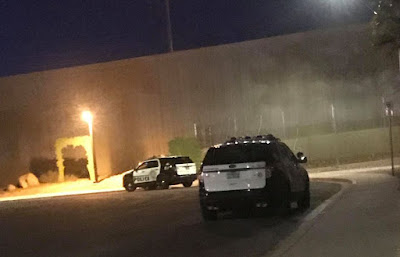 On Tuesday Night the electricity got knocked out when one of the transformers blew. I knew exactly what it was because when it blows, there's a loud bang right before the power was knocked out. The power was out for 3 hours. In those 3 hours the police were all over my street. I heard sirens all over the neighborhood. When the lights go out, people just start acting stupid. I stayed inside except to take the dog out once and saw police in front of my apartment building. I didn't her any fighting but there were a lot of people outside because the lights were off inside. lol
--- 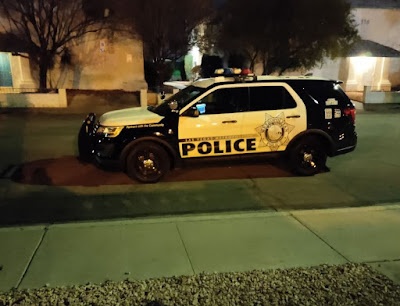 On Wednesday the police were back in front of my apartment complex. They were in the next courtyard over this time but I don't know what for.
----

On Friday I watched the motorcycle police pull a guy over who was riding his motorized bike on the sidewalk. He got a ticket. The police have been patrolling my area really heavily. Pretty much at least once a day I see the police driving on my street.
---
On Wednesday I'm out with Falcor and a big ass dog runs up on me and Falcor. This is the 4th time these people's dogs have been out off leash and run up on me and Falcor. The dog was jumping on me and barking while I was holding Falcor in my arms. I went and told the woman that the next time it happens I'll be calling animal control. This is the second time I've talked to her and she takes no responsibility for the dogs getting out. She keeps saying that they just "get out" like it's not her or his fault or something. If you have a big pit bull or any big dog, you have a responsibility to keep control of them. If you can't then you are too effing stupid to have a dog. Next time I'll be emailing the apartment manager and letting her know just how many flippin animals there are in that apartment. I don't give a damn anymore. I was so mad when I confronted her. This dumb woman just walked away and tried to ignore me because she didn't like what I was saying. Good grief the stupid is strong with this one.  So all my friends on FB were telling me to get pepper spray so I did. 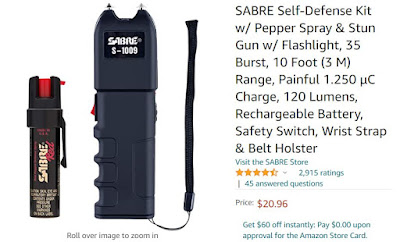 I bought a stun gun and pepper spray duo. If either dog tries to attack me or Falcor at least I can defend us. Because I have a feeling that neither of the people that live there are going to do a damn thing about their dogs getting out off leash and charging me and jumping on me trying to get to Falcor. I already had to hit the one dog in the face just to make it get off me. There's a leash law in this state so it's illegal for them to let their dogs out without a leash.
UPDATE: As of today (Sunday) They have rehomed one dog and have been walking the other big dog on a leash. So hopefully it stays that way.
So that's it for this week's Apartment Hell  Life! Be sure to come back next week for more.
Posted by Mary Kirkland at 12:00 AM 45 comments