Review: Once Perfect by Cecy Robson 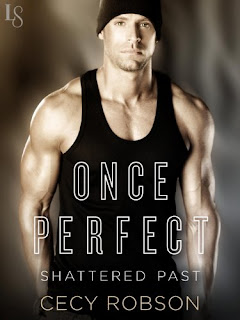 Evelyn Preston’s future once looked perfect—until her wealthy father was caught in an embezzlement scandal and took his own life. Alone and struggling to pay her college tuition and bills, Evelyn finds a job as a waitress at the ultra-hip nightclub Excess, where she used to have more in common with the privileged private-school clientele than her fellow staff members. But something attracts her to the sexy six-foot-four bouncer and ex-army MMA fighter Mateo Tres Santos. Although they’ve led different lives, their troubled pasts bonds them in both survival and love.

Mateo wound up in prison for assaulting the man who harmed his sister. Now he’s feeling the same protective impulse for this petite blond waitress. When Evelyn experiences a panic attack at the club, Mateo comes to her rescue. And when Mateo is wounded shielding her from a brawl, Evelyn returns the favor and comes to his aid.

As their attraction intensifies, Mateo is determined to find out what nightmares are lurking in Evelyn’s past—even if that means tackling his own to save her.

Evelyn grew up privileged and rich but all that came to a crashing halt when her father was caught after embezzling money and killed himself. She lost everything, including her fiance. She has a good friend/roommate and works as a waitress to pay her way through nursing school.

Mateo is a bouncer at a night club and has been looking at Evelyn ever since she took a waitress job there. She doesn't pay him much attention at all until she has a panic attack and he comes to her aid. Mateo also does MMA fighting for the extra money to help his family out.

These two both come to the table with emotional baggage and problems. Some of Evelyn's baggage is buried so deep she doesn't even realize she has it but you know that old saying...you can bury a problem but it will come out eventually and her long buried problems come out in a big way.

Evelyn had a fiance who dropped her after her father killed himself and has been calling her because he wants her back but she wants nothing to do with him. Evelyn is afraid of the dark and when she accidentally gets kinda lost in a dark back room, Mateo comes to her rescue and helps her through a panic attack. That is when a light bulb goes off for her. Mateo might have done prison time, he might be a big guy that scares her but there's a nice side to him as well.

Mateo has a crazy family. His father is an abusive drunk and because of the way he was brought up, he and his sisters think it's wrong to call the police on their dirt bag father when he hits one of them or causes problems. I just don't understand that kind of thinking.

While their relationship is rocky at times, it's very relate-able because they have real life problems that a lot of people end up having. I really liked these two and the secondary characters, while it was a bit darker than I was expecting it was done really well and ended up being a great story.