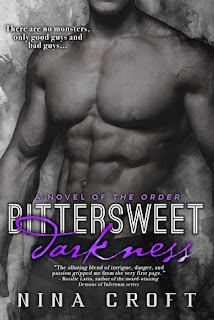 There are no monsters, only good guys and bad guys. That’s the creed by which Detective Inspector Faith Connolly has always lived.

When Faith discovers she has a time bomb counting down in her head, she has one goal: to solve the murder case she’s working on and gain closure. Her investigation brings her in contact with Ash Delacourt, who is definitely one of the bad guys, albeit a stunningly gorgeous one.

As payment for a debt, Asmodai, AKA Ash Delacourt, finds himself working with the Order of the Shadow Accords. He’s the demon representative on the newly formed committee for the integration of mankind and well…everything else. It’s a chance to be near his daughter, make a new start, and—once he’s met the delectable Detective Connolly—maybe have a little fun.

But as Faith’s investigation deepens, her beliefs are eroded and for the first time, she is falling in love—with one of the bad guys. How can she ever let Ash close when her time is running out…?

Detective Faith Connolly was tracking a killer when she fell ill and while in the hospital she finds out she had a stroke and doesn't have much time left...terminal brain aneurysm that could go off at any time. She thinks the killer is some weirdo, a vampire wannabe but the truth is harder to accept. Real vampires don't exist, do they?

Asmodai or Ash as he likes to be called is a demon that works with the order of Shadow Accords and his life is about to get a lot more interesting. Not only is he trying to spend more time with and get to know his daughter better but now he's also trying to get to know Faith better.

There's quite a lot going on in this book and right from the start it seemed like everyone involved was somehow connected to everyone else and some of the players either wanted revenge or weren't the good guys they first appeared to be. But then again some of the supposed bad guys weren't as bad as I would have thought either.

There's a lot of fighting, kidnapping, bullets flying and Faith finds herself in the middle of something she doesn't realize could be dangerous until it's too late.

I started with the 3rd book because I read the blurb and a review and it hooked me. After I read this one, I knew I was gonna need to read the rest of the series and bought the others as well. And I just have to say that I hated the cover. Anyone who knows me knows that I really hate these headless torso covers that bring to mind images of the Highlander movies...Off with your head! But this book was so darn good. I love stories with vampires, werewolves and other supernatural creatures and this book has them and more.